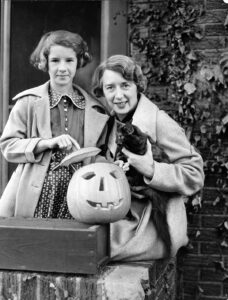 Iâm beating a dead horse when I talk about Beggarsâ Night versus Halloween. Seemingly every news station and media outlet will have yet another story about the history of Beggarsâ Night. And my Halloween-obsessedDes Moines Forgotten friends will once again rant about how offensive it is when I donât celebrate Halloween on Oct. 31.

Let me get my personal rant out of the way. First, some brief history. Beggarsâ Night started in 1939 because of the vandalism and bad behaviors that were happening on Halloween nights. In 1938, the Des Moines Police Department reported more than 500 calls. As a result, parents feared having their kids trick or treating on the same night as all this other stuff, so the date was changed to Oct. 30. Unfortunately, moving dates doesnât change things. If folks want to vandalize, they can do it any night of the week. They would also likely be more up for doing so in costumes like everyone else. If I was a heathen looking for trouble, I would simply adjust my plans and move my anarchy operations to Beggarsâ Night. Rant done.

This vandalism wasnât just a city occurrence. Stories of pranks and destruction were heard in the rural communities, too. Jeanie Snyder grew up in Audubon during the 1940s and 1950s.

âWhen I was a kid, we didnât go trick or treating because I lived in the country and went to a country school,â she said. âThere were lots of stories about tricks people got up to: a sack of manure set on fire outside someoneâs door and then the tricksters ringing the doorbell; soaping windows; and once a story about someone putting a cow on the roof of the high school. That one has to be a myth.â

Snyder said she also saw the results of pranks at her school.

âWe had an outhouse that someone enjoyed tipping over every year until the school cemented it down,â she said. âThat year, we returned the next day to see lots of glass from broken headlights in front of the toilet.â

Kathryn Krieg, who was the director of the Des Moines Parks and Recreation Department (back then known as the Des Moines Playground Commission), proposed a Beggarsâ Night where kids would say âTrick or Eatsâ instead of âTrick or Treat.â It didnât stick.

If we go back to the 19th century, Halloween was all tricks and no treats. America is responsible for urbanizing what was a rural celebration in the Celtic countries of northwestern Europe. It was the end of the agriculture year. Harvest time. End of summer. Samhain, the beginning of the season of dark and cold days. As folklore goes, it was because of the long nights that the spirits would set themselves free, and they were to blame for all creeps and tricks. So, children would run off and play tricks of their own. As the years went by, the tricks would escalate. During World War II, the Chicago City Council voted to abolish Halloween and replace it with âConservation Dayâ on Oct. 31. The mayor would not sign it into law.

During President Harry Trumanâs years, the Senate Judiciary Committee suggested that Halloween be changed to âYouth Honor Day.â The thinking was this would push an event that promoted morals rather than mischief. A few cities took this up, but the general public didnât seem to care much about crowning a Youth Honor King or Queen. Beggarsâ Night, however, at least maintains some form of Halloween festivities with wearing costumes, walking door to door, and holding out giant bags to receive candy from your neighbors. Replacing something exotic and fun with something that walks the line of church camp just didnât seem fitting. Halloween is a time when we can let go of our conservative tendencies and be outgoing, mischievous and indulging.

I want to circle back to my friends who are grumpy about Beggarsâ Night. To me, Beggarsâ Night is just an extension to Halloween. We can all still celebrate the original holiday on Oct. 31. Beggarâs Night is really just for trick or treating. We can revel whenever we want to. Some folks have four Thanksgivings or four Christmas celebrations. You can have 31 days of Halloween, too, if you really want to. n