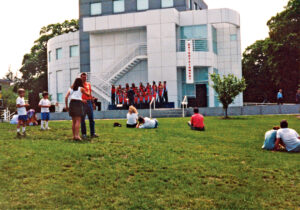 The original Art in the Park. From the Des Moines Arts Festival Archive.

Itâs bittersweet to write this piece on the event that would eventually become the Des Moines Arts Festival (DMAF). Since 2011, I had been involved with DMAF and its Interrobang Film Festival as a programmer and event producer. In 2021, I retired from that position so I could focus on my film work and writing. As we are steamrolling into the summer of 2022, it is the first time in 10 years I have not been involved.

In 1983, before the Des Moines Arts Festival, as we know it today, there was Art in the Park. It had a few lives over the 30 years prior, including the All-Iowa Art Fair, Iowa Artists Exhibition, Iowa Artists Annual Show, and Iowa Art Show. The origins go back to 1953, when the Des Moines Art Center, wanted to celebrate its 10th anniversary with an event. It was held on grounds surrounding the Art Center including Greenwood Park. 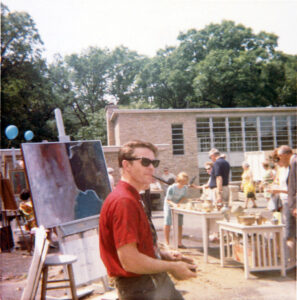 Since my early days with the Des Moines Arts Festival, I have watched artist Judy Whipple sell out on opening day and have to leave the festival grounds to get back to her studio and paint more work. Her husband Joe would manage their tent while she would try to get more pieces completed as quickly as possible.

âI participated in Art in the Park from the beginning. Back then, one of the requirements to be a part of it was to have work in the Art Center Shop and/or have work on the walls in the main gallery,â Whipple said.

Eliot Nusbaum wrote in The Des Moines Register on June 2, 1983: âWHATâS LEFT to be said about the Des Moines Art Centerâs annual Art in the Park Fair? Well, itâs never been rained out… not once in its 30-plus years. So, set your alarm for early Saturday morning and plan to wash and wax the car, put up the screens and fix the shingles before heading over to Greenwood Park to take in the sights, food and entertainment â all starting at 10 a.m.â The rain could only hold off for so long.

âMy husband and I used to attend that every year. It was a much smaller affair, of course, but it was in a lovely setting in the Art Centerâs âbackyardââ¦. that is until the year that it rained and rained so the park was a quagmire. They put down straw to make a better surface, but then the sun came out and the temperatures climbed, and the straw began to smell,â said Jeannie Sheldon of Waukee. 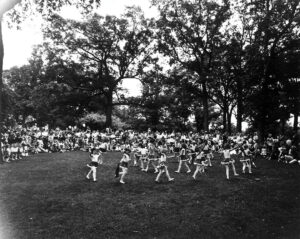 In 1992, Art in the Park moved to the Iowa State Fairgrounds. In the Nov. 25, 1991, edition of The Des Moines Register, Kim Knutson, who was the events coordinator at Des Moines Art Center, was quoted: âThe size of the fair and the number of visitors, the weather and the impact on Greenwood Park… the park was extensively damaged last year â you may recall there was some rain â and the museum wound up spending a lot of money to repair and reseed the area.â

Art in the Park stayed at the Iowa State Fairgrounds until 1998, when it moved to the Locust Street, Walnut Street and Court Avenue bridges over the Des Moines River. This was also when the named changed from Art in the Park to The Des Moines Arts Festival. From 1998 to 2006, the festival lived on the river. However, once construction started and limited access to the bridges, the festival moved to Western Gateway Park and became the event we have experienced for 15 years. Itâs still not a Des Moines Arts Festival without a storm to come through this city and remind us that we are just a guest in this world. ♦