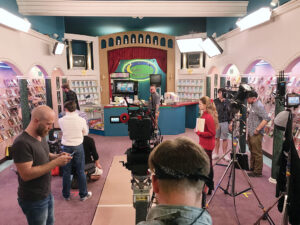 The âPlay by Playâ crew builds their own video store within Video Warehouse.

A year and half ago, we lost an important piece of Des Moinesâ cinema loversâ history, Video Warehouse. Many stories have been told about the place since its closing was announced, but I have a particular memory that not many people may be aware of â a digital series called âPlay By Playâ that used Video Warehouse as a set location.

Turn back to October of 2016 when Iowa was deep into political season, and we were getting hit by all forms of media folk intruding our coffee shops and restaurants. It was a wild time, as always, except there was a narrative coming to Iowa about journalists who were embedded into a faux presidential campaign. The series âEmbedsâ was based on the real-life experience of journalist Scott Conroy.

The production company that was producing âEmbedsâ needed to make another show before the end of the year, a 1990s family dramedy like âMalcom in the Middleâ and âThe Wonder Years.â So they snuck in this other show, called âPlay By Play,â which filmed from the beginning of November through Christmas. Long story short, âEmbedsâ ended up being a one-and-done, never to be revisited again, but âPlay By Playâ was renewed for a second and third season that was going to shoot in the late summer/early fall of 2017. 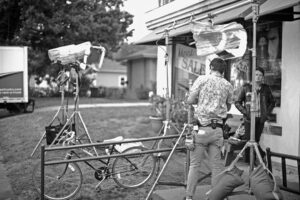 I got the call in June and was sent scripts for all 16 âPlay By Playâ episodes. Flipping through them, I landed on a page where our lead actor got a summer job at a mom-and-pop video store. Growing up in the 1990s, I remember going to these stores in Cedar Rapids and Rock Island, and the smell instantly hit me. I knew we had to use the much-treasured Video Warehouse building on Merle Hay Road. The only other video shops left in town were Family Video stores, and I couldnât see the producers wanting to deal with the corporate red tape that it would take to make that happen.

In October of 2017, we moved our production base camp to the parking lot of Video Warehouse at 5801 Franklin Avenue in Des Moines. I walked to work every day from Polk Boulevard, cutting through the Glendale Cemetery to Franklin. The place was like a compound after we moved in. Inside, we removed the DVDs and created our own one-room video shop. The set designers used more than 100 video tapes from my own collection to fill the space, including all of the horror section. We even made a small room with a beaded curtain covering it that was the old âAdult Sectionâ that I donât believe was ever part of Video Warehouseâs genre categories. 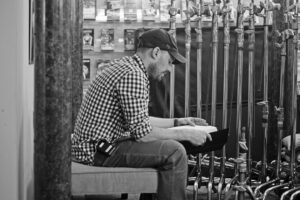 I oversaw casting extras for these scenes, and it was empowering. One person I brought in was Dick Klemensen, the publisher of Little Shoppe of Horrors magazine, the journal for Hammer and British horror films. (CITYVIEW readers may remember my feature story on him in the October 2018 issue.) He is the Forest J. Ackerman (âFamous Monsters of Filmlandâ) of Iowa.

Lo and behold, Verizonâs Go90 platform, a mobile-oriented social entertainment platform targeted primarily to millennials, shut down. The showâs assets were then liquidated. A few years went by before all three seasons of âPlay by Playâ were finally released. They can be seen on the Roku Channel. Unfortunately, in the spring of 2021, Video Warehouse closed, but memories like these remain. ♦