On the morning of March 23 at 10 a.m., many Iowa communities held a statewide test of their tornado sirens. This was different from the usual Saturday noon test, or as I like to tell people, the âlunch siren.â We are now several generations separated, but I remember hearing stories about the âDuck and Coverâ days and the fear that came with the Atomic Age and the nuclear arms race.

When the Soviet Union launched its first atomic bomb in 1949, Americans were rightfully nervous. In 1945, the U.S. had dropped its atomic bombs on Hiroshima and Nagasaki in Japan, signifying the end of World War II. The destruction was seen by the world, and we had yet to learn about the dangers of radiation and fallout. In 1951, President Truman created the Federal Civil Defense Administration (FCDA) to announce and implement precautions that should be taken to survive an atomic attack from the Soviet Union. One of the most famous approaches was at the public school level where teachers were trained to conduct air raid drills. They would yell âDrop!â and students would react by kneeling under their desks with hands clutched around their heads and necks. The FCDA commissioned what is now considered a famous educational film called âDuck and Coverâ in 1951. The film was just as ridiculous as most educational scare films of the atomic age were. It combined a mix of live action actors and animation featuring a turtle named Bert that wore a pith helmet. Bert would encourage kids to duck down to the ground and get under some form of cover like a desk, a table, or next to a wall.

Upon the release of âDuck and Cover,â the hydrogen bomb was being tested and introduced a new threat. The H-bomb was more complicated and more destructive than the A-bomb that was dropped on Japan by the United States. In fact, it took a smaller A-bomb just to ignite an H-bombâs fusion material. To put this in perspective, the A-bomb dropped on Hiroshima was equivalent to 15,000 tons of TNT. The H-bomb was the equivalent to 10,400,000 tons of TNT. This is 10.4 megatons of energy versus 15 kilotons of energy.

âFire alarm bell is constant; the âCivil Defense Sirenâ bell is intermittent, which means it rings and stops, rings and stops, rings and stops. When you hear the âCivil Defenseâ alarm bell, you will be told whether to open the windows (tornado) or close the windows (A-Bomb),â Monte shared. âThen go to the nearest concrete block wall and get as close to it as you can; duck face down and cover the back of your head with your hands. Stay in this position until you hear the âAll Clear,â which was just one long bell. I remember very clearly learning and practicing this drill in kindergarten, in Carbondale, Illinois, where the wall that the teacher told us to use was directly under the row of classroom windows.â 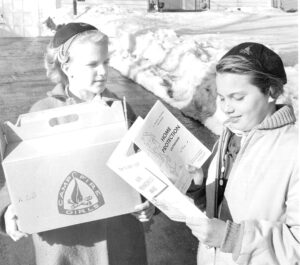 Some public schools issued metal dog tags to students like those issued to soldiers at war so they could identify the bodies of students after an attack. In the 1960s, President Kennedy was a major advocate for fallout/bomb shelters. He encouraged families to dig holes in their backyards and build shelters to ensure survival of a nuclear attack. People would stock the shelters with everything needed to sustain life: canned goods, clothes and even board games.

âI recall seeing fallout shelter signs in downtown Des Moines when I was a boy,â said Leo Landis, state curator at the State Historical Society of Iowa. âI donât recall worrying too much about the Soviets or an atomic attack on Iowa like people did in the early 1950s. Clive had a noon siren like a lot of Iowa towns through the 1960s and 1970s. While today we think of these as severe weather sirens, many were originally placed as civil defense devices in World War II.â

Is there a red button sitting on a desk somewhere in this world that fires a missile or shuts off the Internet? Uncertainty is the catalyst for fear. What will happen next? ♦