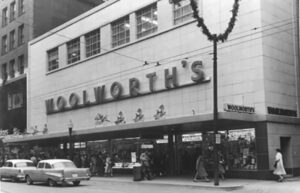 For the last 10 years, I thought variety stores were a front for some type of shady black market deal. Amazon, Walmart and Target have seemingly taken over every type of retail flavor we can think of. Five and dimes. Remember those? Everything was 5 to 10 cents less than the competitor. I thought it meant that everything was 5 or 10 cents and often wondered how these stores made money. (This was, in fact, true, but not since most of us have been alive.) I feel like I am not part of a generation that cares about savings or customer service. What sells me on something is what will interfere with my life the least. This includes me not leaving my house or interacting with any type of salesperson. My Baby Boomer father, on the other hand, loves the traditional process.

Most everyone in Des Moines is familiar with the live music venue Woolyâs. If I had a nickel for the number of times I walked out of there covered in fake bodily fluids from a GWAR concert, I would have enough money for a few cups of coffee. But long before all this, it was a Woolworthâs store. In fact, this was the storeâs second location.

Once upon a time, there was the Victor Dime Store, which was located across the street from where Woolyâs is now at 523 E. Locust. It was run by E.J. Trumbull, and on May 1, 1916, an announcement was made that it was being sold to the F.W. Woolworth Co., which would take possession on May 15 (from The Evening Tribune, May 1, 1916).

Woolworthâs operated in this location for a bit more than 20 years. On Oct. 19, 1950, Woolworthâs had its grand opening at 504-508 E. Locust with 9,000 square feet of air conditioning, fluorescent lighting, a cafeteria, and a giant stainless-steel and dust-proof candy case. Cafeterias in stores like this and others were significant back then because customers spent much of their day shopping at a store and needed to stop and take a lunch break. This was common back in the days of the Younkers Tea Room, and even Macyâs and Bloomingdales had cafeterias during their peaks. Admittedly, I do find myself taking a snack break at Ikea when I make the trek to Minneapolis or Chicagoland, so I guess itâs really not in vain. A grand opening advertisement featured in the Des Moines Tribune called Woolworthâs restaurant side: âDes Moinesâ newest and most modern lunch department.â 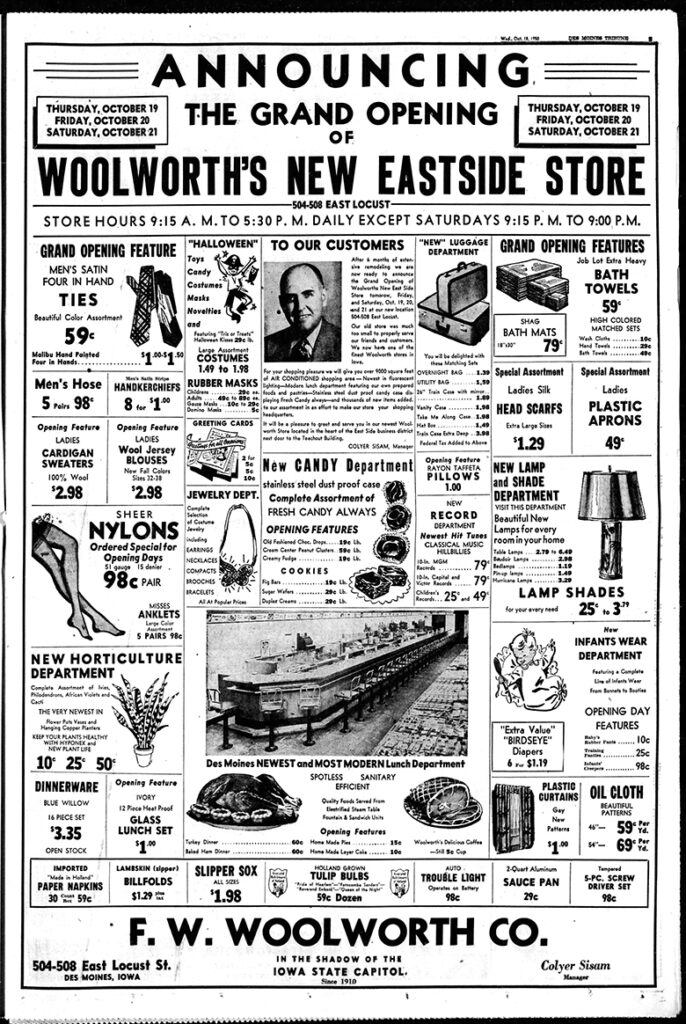 Woolworthâs was originally founded in Utica, New York, and Lancaster, Pennsylvania, in 1879 by Frank Winfield Woolworth. Both started as 5 cent stores but eventually raised the price ceiling to 10 cents, which reportedly made them profitable. By 1904, Woolworthâs stores totaled 120 in 21 states as far west as Colorado. F.W. Woolworth passed away in 1919, but not before he merged a handful of rival companies into his own. These included Seymour Horace Knox (Woolworthâs first cousin) with 108 stores; Fred Morgan Kirby with 84 stores; Charles Sumner Woolworth (Frankâs brother) with 14 stores; and Earle Perry Charlton with 48 stores. This eventually grew the Woolworth company to 596 stores across the country. The company headquarters was the Woolworth Building in New York City, which was the tallest building in the world from 1913 to 1930.

As time moved on, Woolworthâs raised its price ceiling to 20 cents and then abolished the price limit in 1935. By 1982, the company had 8,000 stores but was starting to see serious competition by none other thanâ¦ Kmart. The Woolworth company began to rely more heavily on its specialty stores including Foot Locker, but things were starting to go downhill. The flagship Woolworthâs stores were declining, and their doors shut in 1997.  This was the end of the venture in general merchandise style retail stores. Woolworthâs is gone and is now renamed as Foot Locker, Inc.

As I drown myself in nostalgia for a moment, I realize that my fellow millennials were probably the last to really enjoy the traditional holiday shopping season with store-front window decorations, people gathering with their families in line for the 6 a.m. Black Friday sales, and knowing that only a few of your friends would unwrap that original Sony PlayStation on Christmas morning. That experience still provides a warm feeling for many. But a growing number of others are completing their holiday shopping from their couch or a public restroom on a phone. without disrupting too much of their busy lives or getting up early to trample over their fellow man. So whether you shop at the stores in person or hang out at home and watch âDie Hardâ while filling up your online carts with gifts, be sure to enjoy the season for what it is today, as who knows what the future of shopping will be? ♦