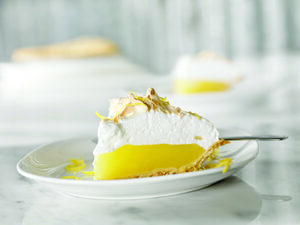 Lemon meringue pie brings back memories for many.

As a former employee of Bishops Buffet in Cedar Rapids in both the Lindale and Westdale Mall locations, I still have nightmares from memories of the Thanksgiving and Christmas day craziness. Bishops was open on both holidays, and we would have a massive line for pie orders. Those of you who remember Bontels Restaurant & Bakery in Des Moines can relate.

Bontels was located at 4950 E. 14th St. in Des Moines, just off Interstate 80. As such, folks both local and traveling through could find it effortlessly. It was the mom and pop version of a Perkins or Village Inn. The location now has a Quality Inn hotel.

Dave and Bonnie Bartel opened the restaurant in 1988 and used a combination of Bonnieâs first and last name to come up with âBontels.â That might be obvious to those of you who visited the place, but it took me a couple looks to sink in. The couple previously worked in education and then spent 10 years running various restaurants while Dave also operated a construction business. 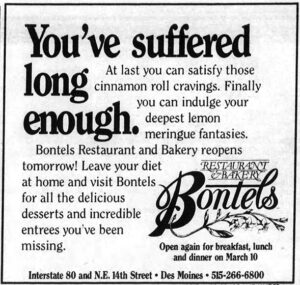 An advertisement for Bontels Restaurant and Bakery from 1989.

A news story in The Des Moines Register from December of 1988 introduced readers to the new restaurant. What I found interesting was the mention of baker Richard Mais, who was a veteran of Poppin Fresh Pies. Some of you might remember when these were purchased by Village Inn in the early 1980s. All of the Poppin Fresh Pies were changed to Bakers Square.

Barbara Mack, who was the Datebook Diner food critic for the Register in 1988, gave the restaurant 3.5 stars out of a rising scale of 0 to 5. The column stated that she tried a selection of pies and âthe hands-down winner was lemon meringue.â In 1999, Datebook Diner food critic W.E. Moranville was not as complimentary, stating, âThough Bontels is known for its pies, I found them fine but not outstanding. The best we sampled was the refreshing sour-cream raisin, with its old-fashioned appeal.â

Jim Sheldon has fond memories going to Bontels after mass on Sundays with his family.

âTheir pies were the best,â he said. âThey had fruit pies and cream pies. All were good. Wish they were still here.â

Many locals like the Sheldons had a tradition of heading to Bontels for their Thanksgiving pies, but they had to order ahead as there was no promise that Dave and Bonnie would have any left the day before the holiday.

In May of 1999, after 11 years of running Bontels, the Bartels shut the place down and opened the first Red Roof Inn and Suites in Des Moines. They had operated restaurants together for nearly 20 years and wanted a change. Bonnie was going to manage the hotel along with a counseling office for kids.

Even today, there is something about pies that bring back great memories, whether picked up from a restaurant or made from scratch at home.

âPies were the keys to a peaceful weekend,â shared Jim Stordahl of Des Moines. âMy dad was a traveling salesman. There were four children at home. If we had a story about helping Mom during the week, we had a happy weekend. My route to happiness was helping Mom in the kitchen, with baking pies and bread and doing dishes. A fresh pie baking on Saturday afternoon was the sign of a healthy and happy family.â