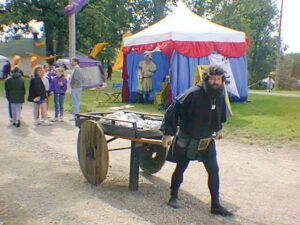 Iowa Renaissance Faire is about to celebrate its 30th anniversary. Photo by Allen Huffman / AtTheFaire.com

It might be a little out of season to be thinking about summer festivals, but a reader reached out to me with a topic that I have been curious about for several years. The Iowa Renaissance Faire has yet to physically lure me in, but I have a handful of friends who have devoted much of their lives to this whole thing. In fact, I even have friends who travel year-round to participate in other renaissance fairs around the country. Itâs probably no different than folks who travel the world to participate in golf, surfing (remember the movie âThe Endless Summerâ?), or the one I just had the misfortune to indulge inâ¦ bowling.

Schmidt, of Clear Lake, attended the Minnesota Renaissance Faire in 1990 and thought, âI have to do this in Iowa before someone else does.â He was already involved in the theatre world where he ran the Clear Lake Summer Theatre and brought in Hollywood actors for roles along with local talent from Des Moines as well as the Guthrie Theatre. This was happening from 1985 through 1987. He also received a grant to attempt to revitalize the opera house circuit in Iowa. From those experiences, Schmidt decided to start the Iowa Renaissance Faire before someone beat him to it. He formed a company called Festivals International.

âThe first Iowa Renaissance Faire took place at the North Iowa Fairgrounds in Mason City. We knew the manager, and we got free rent. No insurance was needed, and we got a grant from the Hanson Foundation (from Forest City). We did two weekends in September and
October of 1992, and it caught on. Lots of people came up from Des Moines. We met our first performers there including one group, the Orcs & Trolls, who are still performing today,â says Schmidt.

âI remember that first weekend in October, and the storms came through,â Schmidt says. âThe city was already flooded, and we were sitting up on a hill in the campgrounds. All these tents just started falling into each other. Everyone piled into the shelter house, and we told
all the cast and merchants, âWell, guys, itâs all downhill from here because if we can survive this, we can handle anything.â And there we went.â

âAbout four of five of the young people who worked with us went on to have professional careers. I had a little 9-year-old girl who dressed up as Dorothy from âThe Wizard of Ozâ who used to take tickets for me. Her name was Jessica Saunders, and she went on to become a
professional opera singer.â

Schmidt and his cohorts were not just hiring acts to perform; they were also being hired to perform around the city including by the Coppola family (when they still ran Java Joes) who brought the group in to help revise Court Avenue.

The Iowa Renaissance Faire vacated Des Moines in 2000 and moved to the Amana Colonies.

âIt was close to Cedar Rapids, Cedar Falls, Iowa City and Marshalltown. It did really well, and we were out of Des Moines for about four years,â says Schmidt.

That same year, they produced the Millennium Festival in Chicago. Eventually Schmidt created a sister event called The Des Moines Renaissance Faire. The Iowa Renaissance Faire is about to celebrate its 30th anniversary this year at the Amana Colonies location.

Yes, Iowaâs art scene has a great history. I love hearing about the folks who hang out at the Des Moines Playhouse or Moberg Gallery, but also the people who will pile into tents for two weeks and joust on horseback just to entertain you for a few minutes. You canât buy a piece of fine art from them, but you can buy an experience.