Chad from Amsterdam is one of my new favorite humans. 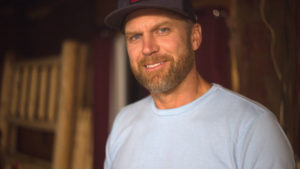 Every year I get some traveler from outside of the U.S. who passes through Des Moines while on a cross country trek (usually from Manhattan to San Francisco). My first experience was with two young men from Germany who were making the trip on bicycles. On the night they arrived at my house, they had biked from the Quad Cities. I will never forget their smells and their uncontrollable desire to do push-ups in my hallway. The boys ended up meeting some new âfriendsâ down at GTâs on Ingersoll and never made it back to my place.

This year we have Chad from Amsterdam. Chad is one of my new favorite humans and falls under the category of âAction Sports Dad.â These are the real guys who GoPros were made for. Guys who used to skateboard, rollerblade and surf all the time and who are now dads. They usually wear Dickie shorts, V-neck shirts and a nice designer ball cap.

Chad arrived in D.C. back in June and has been making his way across the country on his way to Vancouver, B.C. He stopped in Des Moines for 515 Alive.

You were telling me that this is your first time traveling this far north in the U.S. What has kept you away until now?

The easy answer is I have always traveled in the spring. In the past, I have always come through the states for South By Southwest. I would arrive in North Carolina or Los Angeles, and I would make my way across. To be honest, the option to fly right into Austin was always there, but I felt like I was doing myself a disservice if I did that. We all kind of take for granted that all of this world is here around us. I donât want to be that guy. Plus, I am getting married in the fall, and although my girl is amazing and we say we will keep traveling, I know life happens and that may not always be the case.

How does your future wife feel about you disappearing for nearly three months?

She is fine with it. She has a friend from university that does the whole backpacking thing. In fact, they actually couch surf through Ireland, Germany, all these European countries. They literally hike, and I do this in the comfort of a nice rental car. I used to be more daring, and I could have done this trip on a bicycle, but I am kind of tired of being sweaty and gross for the majority of the day. Thatâs not fun anymore. But my girl and her friend Lisa, they donât care. She also tells me the smell at the end of the day keeps the criminals away. But we talk every day, if not twice a day. We have done this enough over the years that if we lose connection for a day, we donât sweat it. We just make sure we make an effort to try and communicate with each other.

You came up for 515 Alive. I actually havenât paid attention to the festival in several years, and last time I looked it was a much smaller event. Now itâs huge.

So 515 Alive is the first non-South by Southwest festival I have attended in the U.S. Itâs actually really big. You have to like electronic music, dancing and things that glow. I canât say I am that guy all the time, but it was worth checking out. Compared to others who attend, I am pretty tame.

You could have picked so many other places, and yet this is the spot you settled on?

I really wanted to check out the Midwest. So I hit Chicago, Milwaukee, Madison and Cedar Rapids before I stopped in Des Moines. From here, I am going to drop down to Kansas City and work my way toward Denver and then through Utah. I really want to check out Moab and do some serious hiking. I used to do a lot more rock climbing and mountain biking. When I say âused to,â I mean like six months ago, not like several years ago. But I donât want to mess things up by getting hurt this close to our wedding. I could be standing up there on crutches or in a wheelchair, and although I know she would just think itâs funny, I really donât want to do that. I want to at least attempt to be concerned about how this extremely important day of our lives should be perfect. I mean it is, but I feel like the whole thing is just for our families. If it was up to the two of us, we would jump out of a plane with the priest and do the whole thing in the air. So by the time we touched the ground, we would be husband and wife. ♦