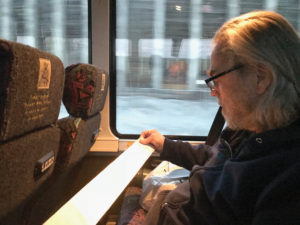 Meet Roger Barrett from Grand Forks, North Dakota. I met Roger on my way back from Minneapolis where I was working a gig for CNN. Most people who know me are very much aware that I do not have a car (by choice; I am a motorcycle guy only). I was having a very annoying adventure at the Greyhound Bus Station. I was carrying too many things, my Uber dropped me off between a muddy snow mound and gridlocked traffic, and, of course, itâs a bus station, which means the health department has not made a visit since 1981.

I sat down outside of my gate, and a voice behind me said, âIs that what you use to sleep on picnic tables?â

He was referring to my yoga mat that I had placed in a seat of its own so that it would not touch the floor. I turned around, smiled and sarcastically replied, âHowâd you guess?â

Roger is 70 years old and was traveling to Tucson, Arizona, to pick up his motorcycle. He left it down there a few months earlier because he was having some health problems and needed to return to Grand Forks. He was heading back by way of the Greyhound bus and planned to ride it all the way back home.

What do you consider yourself? Retired? Transient?

I am a semi-retired adventurer. I really didnât make a note when this was official. Iâve been taking random adventures since I was 20 years old. The first time was to Kansas City. I had a great aunt down in St. Louis, so I bought a bus ticket and went down there. But we had a layover in Kansas City, and while we were waiting down there, I was looking at the newspaper and found all these âhelp wantedâ ads. I was a welder by trade, so I thought I would call a few of these people, and I ended up finding three jobs. So, I stayed and went to work the very next day. I found a room down there to live in, and as soon as I got paid, I went on to St. Louis to get my suitcaseâ¦ I stayed in Kansas City, but my suitcase went on to my original destination.

Today you wouldnât really hear of anyone making those types of unplanned decisions like that. It could be potentially pretty dangerous. Plus, I donât know of any place that would rent you a room without a monthâs rent as a deposit.

Well it was a different time back then. I ran away from home when I was 16 years old. I got on a train heading to California because I was being abused by my dad. I had been living with my grandmother while all this was going on, and I was going to start fighting back; however, I didnât want to end up going to jail over something like this, so I headed out to Redondo Beach, California. I made it to my aunt and uncleâs place. But you know they found me and made me head back to Grand Forks. My grandmother sympathized with me. I was the oldest of seven kids.

When I graduated high school, she got me a suitcase as a graduation present.

So how long did you stay in Kansas City?

Well, at age 21, I was drafted for the service. This was 1969. It was a little late for them to come calling for me, but they did, and I got sent to Fargo, North Dakota. During an early interview with me, they asked me to volunteer. I told them Iâll go if I have to, but I will not volunteer for the U.S. military. All it took was that one statement, and they decided they didnât want me. Once I got back to Kansas City, a buddy of mine introduced me to a girl, and we got married. But things were getting rough down there. Riots were starting. So, we moved right before Christmas of 1969. We drove a 1966 Mustang pulling a trailer and went up to Seattle, Washington. I lived there for 12 years. We ended up only being married for five years. It just wasnât my thing. She moved away, and I never remarried. She passed away a few years ago. I went back for her funeral. She kept my last name and never remarried either. We didnât stay in touch, but I did come back for her funeral. It seemed fitting.

What happened after Seattle?

I moved to Wenatchee, Washington, and was a freelance mechanic for a couple years. I also worked at apricot orchards for some extra money. My life was a freedom ride. I didnât think about a career, retirement, social security or anything like that. There were times I was living in a van, and there were times I had more money than I knew what to do with. I came back to Grand Forks in the mid to late 1990s where I set up an auto shop, bought a house, etc. Then the flood came, and it really wasnât worth rebuilding. My grandmother told me once that when you get older, time moves faster. You are 32 years old; to you, 20 years is a long time. For me, 20 years is nothing. ♦