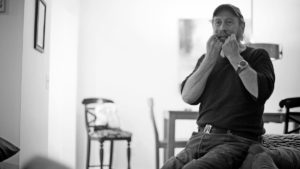 I thought for years that couch surfing was a young personâs game, until I met old Barry from Colorado. He is 72 years old and is traveling to Toronto in his 1983 Cadillac El Dorado that gets 8 mpg. This is probably one of the most expensive trips I can think of in my four years of hosting couch surfers. Most all had found a cheaper way of living, but Barry decided to live out the last decade of his life (he is assuming his last decade; one never really knows) seeing the world the way he saw it as a kid while living off his retirement fund.

The car parked in front of my house probably canât take e85 fuel can it?

âAbsolutely not! This car is a manâs car! When I say man, I mean someone who is well past their prime. This beast took the long way from Colorado to Des Moines. We bypassed Nebraska and went through Kansas. It cost nearly $100 more in gas, but I wanted to stop and see some friends in Lawrence.â

You are by far the oldest person to stay with me and also the least economical minus the couch surfing part itself. At 72 years old, what made you want to hit the road and with a gas guzzling 1983 Cadillac El Dorado?

âI grew up in Santa Cruz, California, and my parents would take me on âfamily road tripsâ all the time. They were always really long because back then the speed limit was always around 50/55 mph. We would take Highway 1 down the coast and then get on Route 66 in Los Angeles. Those road trips were taken very slowly. We would stop at themed motor inns alongside those old American highways. That was America to me. Though we never went past Colorado in a car. If we headed east of the Rockies, we flew. At 72 years old, I have the opportunity to see the world again, and I wanted to do it the same way I did it as a kid. This will probably be my only chance to see this
side of the country on four wheels.â

Most people who stay with me are in the middle of their careers. Obviously, you are done with yours, so what was the previous 40 years like for you?

âI never married. I did have some long-term relationships with some very amazing women, but we just never settled down. At least I didnât. Before living in Colorado, I was in California. First Santa Cruz and then later on in Los Angeles where I lived until the late 1980s. I was big into real estate. When I decided to leave, I sold off my half of what was the Gorilla Mines just outside of San Francisco. After cashing in on the property, I got into art dealing as a senior consultant at the Martin Lawrence Gallery in Denver, Colorado. I collected art for many years, and I knew
what to look for to authenticate pieces. I was able to keep that career going through the 1990s. I was an expert in the works of Erte, Warhol (sold a âCream of Mushroomâ painting), and many of the art deco designers.â

Before we sat down to have this conversation, we walked over to the Des Moines Art Center for their opening reception of the Wanderlust exhibition. As a former expert what did you think?

âWell, I was pretty impressed at the collection Des Moines has to offer. It really is impressive. Also it was interesting seeing the socialite community there. We often forget that every city basically emulates each other in some way. Why would Des Moines not have a collection of art-appreciating socialites? The exhibit itself was beautiful. I might need to pass through here on my way back to Denver and visit again when there isnât a huge crowd. Itâs hard to absorb everything when there are tons of people around, but it was the opening, so I would expect nothing less.â

Before you hit the road, what was/is your regular everyday life like?

âI have a routine like most old people. I get up between 5 a.m. and 6 a.m., make some coffee, check my email, and
listen to the radio on my phone. I can get KFOG, which is a San Francisco station that I miss a lot. I might go out
for a walk down the street for some fresh air, then maybe down to this small thrift store where I usually can find
little treasures. People donât realize what they throw out. This thrift store is one of the last stops before you head
up the mountain, so anyone who is moving west, this is where they drop off their stuff. Some things I keep to
decorate my place with, but otherwise I resell it for some pocket change. Every two weeks, I go to this place called
Peteâs Greek Town Cafe. I get a Gyro, dolmas and a warm rice pudding with cinnamon on top. Itâs pretty simple. If
they are out of the rice pudding, then I am having a bad day. But if you think about it, if that is the only thing that
makes my day bad, then I am doing OK.â ♦

Kristian Day is a filmmaker, musician and writer based in Des Moines. He has couch-surfed across the west coast as
well as through the Midwest. He also offers his home up to unknown travelers passing through Des Moinesâ¦ for free. Follow him on Twitter at @kristianmday.