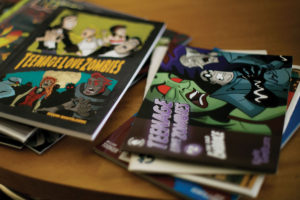 Hailing from Denver, Colorado, comes Kevin Gentilcore. He crashed into Des Moines on his way back from New York to see some friends. Kevin is a graphic designer who also runs an independent comic book publishing business called Creephouse Comics with co-conspirator William Tooker. As a thank you, he placed a stack of comic books on my coffee table.

So you win the award for the best couch surfing gift I have ever received. These stacks of comics will keep me entertained until the winter weather breaks.
You pretty much have the entire Creephouse Comics/Kevin Gentilcore anthology sitting on your coffee table right now. I only had two full sets that I brought with me on this trip. One went to my buddy in New York, and the other goes to you. I took a chance thinking that whoever I stayed with would be into comics. Not everyone is.

Some of these stories date back more than 10 years. When did you decide to finally to publish these yourself?
Well, âTeenage Love Zombiesâ was supposed to be an animated film. I wrote a script back in college. I even produced a short trailer with music and actors doing the voices, but I learned very quickly how much work it was going to take to put the whole thing together without funding. Around 2008, I got a gig illustrating trading cards for Marvel Comics, which at the time was a pretty big deal. I have kept that going ever since. Shortly after that I got an even cooler gig for illustrating these âRay Harryhousen Presentsâ comics for a company called Blue Water. I got to work with Max Landis (son of âAnimal Houseâ director John Landis). âReturn to Mysterious Islandâ was the flag ship of that series. I worked on it for about a year. The biggest thing I learned was that media was changing, and that everything was becoming more democratic. Small companies had the same opportunities as the large ones. The only ones that were on a different playing field were DC and Marvel, or whoever went into making movies/TV shows. So I took âTeenage Love Zombiesâ and a handful of stories my buddy Will Tooker had and we went out on our own. So just over 10 years later, here we are.

Look at your titles: âThe Saga of Metalâ (inspired from listening to countless hours of Viking heavy metal tunes), âBearcanoâ (my favorite), âNever Send a Monster,â and the list goes on. Does this sustain itself? How do you guys manage to keep it up?
Well, number one, we only print issues that we take to the conventions, and then whatever is left goes to our online store. No sense in making more than we can sell. Our printer gives us a deal where we donât have to print like 5,000 issues at a time. Thatâs stupid. No one can make any money doing that. I remember back in 2008 when all these companies had minimum orders that needed to be placed, and if that was still the case, we wouldnât be in business. Besides, there is enough man-made garbage clogging up this planet already. Itâs better for our printer to let us do as many as we want because it ensures that we will be around a lot longer. We also do a good amount of digital comic sales, which there is an unlimited amount of stock and we donât have to do anything except make sure there is always a server to store them on.

Even though you are only in Des Moines for maybe 12 hours, have you done any exploring?
Yeah, Zombie Burger. I had the âWe are coming to get you Barbaraâ burger, the one with two grilled cheese sandwiches as buns. I donât know why that is in Des Moines. Denver doesnât have anything cool like that. Just weed shops, and I donât smoke weed so that doesnât do anything for me. The zombie craze was a little annoying to me. All that post âWalking Deadâ hype. Thankfully I got âTeenage Love Zombiesâ out before that happened, or I probably would have said forget it. I saw that the band Exhumed played here this month, which led me to believe that Des Moines had to have some cool places to check out. While I was waiting for you to get home, I explored the Des Moines Art Center for a little while and got really inspired by that interactive exhibit with all the shrink wrap intestine-looking tunnels that kids (and adults) can crawl up into. That was wild. It just needed to have a layer of red âgooâ in there to finish it off.

To find out more about Kevin Gentilcore and Creephouse Comics, visit http://creephousecomics.com. ♦