The power of the dark side 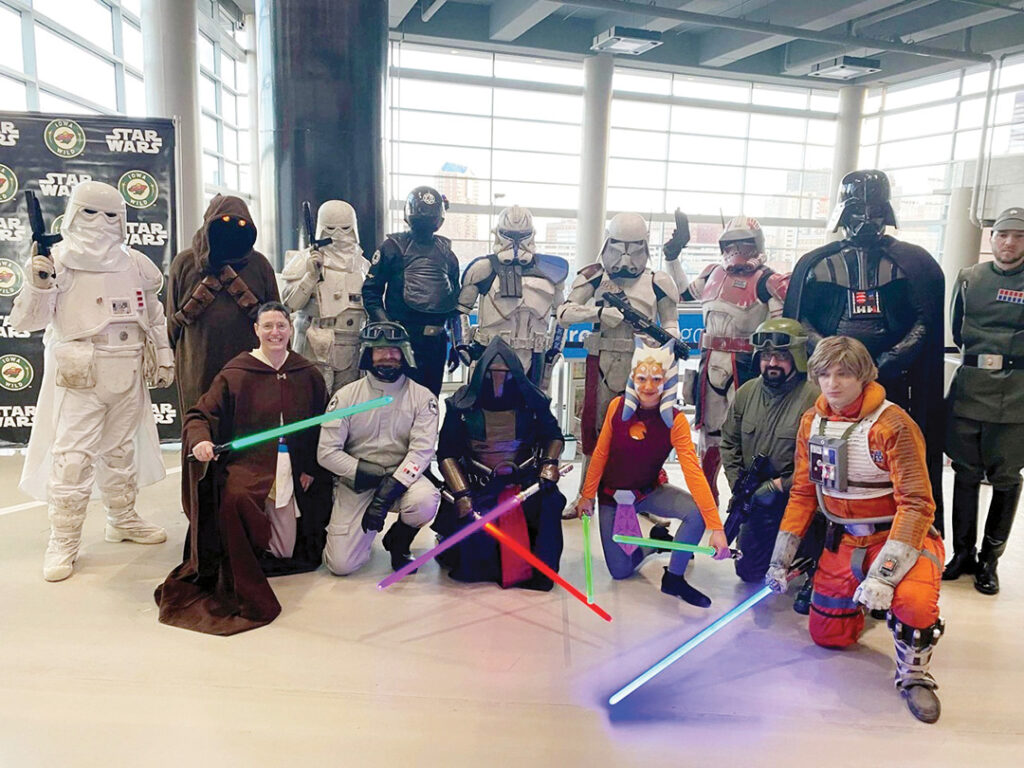 A long time ago in a galaxy far, far awayâ¦ the âStar Warsâ saga was born, and a cult following developed soon after. Not quite as long ago â in 2018 â Ryan Toney began building his first Star Wars costume.

Toney, who resides in Ankeny, is part of the 501st Legion, a worldwide costuming organization founded in 1997 with units on six continents, 69 countries and nearly 15,000 members. His local group, the Korriban Squad in the Central Garrison, has 60-plus members.

Each member owns at least one approved screen-accurate âStar Warsâ costume, the majority of which are hand-built.

âThese arenât costumes where you could go into a Spirit Halloween store and pick something up,â said Toney, who serves as Garrison Merchandising Officer.

No, Toney isnât fixated on the bad guys â the 501st focuses on the evil characters in the âStar Warsâ universe. But while they may dress as villains, members of 501st are quite the opposite.

âThe majority of what we do is kids events and charity work,â Toney said, âwhere we volunteer our time to just show up and make peopleâs lives just a little bit happier.â

The 501st encapsulates its mission in its motto, âBad guys doing good.â While some costuming groups face the risk of intellectual property rights violations, Toney says Lucasfilm â the company that owns the Star Wars brand â âtoleratesâ the 501st because of the good work they do. In fact, the 501st is Lucasfilmâs preferred Imperial costuming group.

The work has been rewarding for Toney. His group has made appearances â always free of charge â at libraries, sporting events, fundraisers and more.

âWe get a lot of chances to interact with kids of all types and different ages, including adults,â he said.  âThey see you and, immediately, they flash back to the first time they saw âStar Wars.â They light up.â

Toney began participating in events over May the Fourth weekend in 2019. Because of the weekendâs significance in the âStar Warsâ fandom, Toney attended six events over two days. The highlight: visiting patients at Blank Childrenâs Hospital.

âWe just got to light up their day,â he said. âJust walked around the hospital for a couple of hours and gave out hugs and high fives.â

Toney also enjoys meeting fellow costumers around the world, both online and through various in-person banquets and conventions.

â[Itâs fun] being able to talk to them like youâve always been friends, even though youâve never met this person,â he said.

One thing costumers can bond over? The great commitment their hobby requires. Hand-built costumes tend to be pricey; Toney estimated having spent upwards of $20,000 on his five costumes.

To get a costume approved, members must meet ultra-specific guidelines outlined in the Legionâs Costume Reference Library. The library determines three certifications for each character, beginning with a screen-accurate look at the most basic level, to the top tier that Toney deemed âabsolutely crazy.â

For example, a level three certification for a Darth Vader costume includes requirements like these: âAn odd number of cape chain links should show (more specifically five or seven) and it should be hooked onto the cape hook on the chest armor via through the center of the center linkâ¦ The center of each coin slot [in the chest box] should have square corners, and contain a semi-translucent red material.â

Aside from including impressively intricate details, many costume parts are created from 3D printed and vacuum-formed plastic. And because plastic isnât exactly breathable, Toney called the experience âextraordinarily hot.â

âMost of the time, most of us are wearing four to five different layers of items,â he said. âSome people have fans inside their helmets. I know thereâs a Vader in Cedar Falls that has an ice vest he wears to keep cool.â

The uncomfortable costumes are worth it, though. In fact, theyâre so good that Lucasfilm sometimes relies on the 501st to provide characters at official events. Watch closely in season one of the popular series âThe Mandalorianâ â episodes 7 and 8 feature costumers from the 501st.

âThey needed extra stormtroopers,â Toney said. âInstead of having to make the costumes and ship the costumes out to the shooting location, they called on the local 501st Legion garrison.â

Those interested in joining the Korriban Squad in central Iowa can visit www.centralgarrison.com. Members must be at least 18 years old.

âWeâre a little bit weird, but weâre very open to other people,â Toney said. âOnce youâre in, it feels like a second family.â ♦