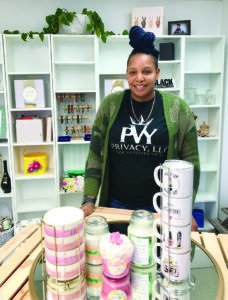 Kourtney Perry started making candles during the slow days of the pandemic.

Laid off from her job, Perry had an abundance of time on her hands. She did some research, ordered a small kit online, tried it out and gave a candle each to her mom and sister. They were ecstatic.

âItâs expensive, a lot of money,â she said with a rueful laugh. âBut as I was ordering supplies and seeing how you can mix all the different scents, it kind of was like a whole science project.â

Candle-making is undoubtedly a science. And a lot of math.

First, Perry explained, take soy wax in its flake form and heat it to 196 degrees F. While thatâs melting, calculate how much wax you need. If you have six 10-ounce jars, youâll need to fill 60 ounces.

Also, donât forget to put the wicks into the jars right away. This gives them time to secure to the bottom.

Next, pour the melted wax into a pouring pitcher and let it cool to 165 degrees F. Then, pour in the fragrance oil. Donât incorporate the oil before the wax has cooled, or else the fragrance will evaporate before it can bond. Stir for two minutes, then let it sit until the temperature has reduced to 130 degrees F.

Finally, pour your concoction into jars. Youâll need to clip the wicks into place so they donât shift. Let the wax harden â the recommended cure time is 48 hours â and then revel in the fruits of your toilsome labor.

After discovering the mountain of work that goes into making a candle, the average person would probably head to a store to grab one from a shelf. But not Perry.

âThe blending of all the materials, to actually see a product that comes out of that â itâs amazing to me,â she said.

Last December, Perry turned her hobby into a source of income. She introduced her candles to the world at her first pop-up show in Altoona under the brand name Ladie Lex. Perry also runs a childcare business and an event coordination company, but among her three entrepreneurial pursuits, the candles occupy the most time.

But the hustle doesnât faze Perry. Sheâs passionate about her product and believes in its benefits.

âAs soon as you light a candle, it sends a trigger to your brain,â she said.

Those triggers stimulate the mind, relieve stress, support sleep, improve mood and alleviate aches and pains, Perry said. It all depends on the scent.

Speaking of scents, it takes a lot of testing to find the right combination of fragrances and essential oils. Perryâs favorite candle includes peppermint and eucalyptus, a combination she has named âEcstasy.â Other favorites are âBarbadosâ (grapefruit, lavender, mint) and âMy Loveâ (pineapple, anise, sage).

Not all combinations are a success. While she does develop her own scents, Perry also takes requests from clients â and some are odd. One customer wanted a candle that smelled like Black & Mild cigars.

âIf I blend something and it doesnât come out right, Iâll usually just burn it at home,â Perry said. âI wonât give it to anybody else.â

As expected, Perryâs home is overflowing with candles, both the successful and not-so-successful. Even her mail carrier has commented on the aroma.

âHe was like, âI want the candle that I smell when I come by your house,â â Perry said.

Smelling, of course, is an essential aspect of the candle industry. Perry started by selling her candles online but found she was missing out on customers.

Fast forward to December 2021, when Perry opened a physical store along Merle Hay Road in Des Moines. Now, customers can sniff and sample scents before spending.

As much as Perry enjoys her hobby-turned-career, itâs growing faster than she can keep up. Currently, she makes all the candles in the basement of her home â solo. Soon, she plans to hire assistants and acquire a warehouse space. Along with container candles, sheâs also been exploring pillar candles and wax melts, and she hopes to offer candle-making kits for children.

Compared to many candles found in stores, Perry said hers are much safer: created from 100% soy wax, an all-natural and biodegradable ingredient. And thatâs not the only thing that sets her candles apart.