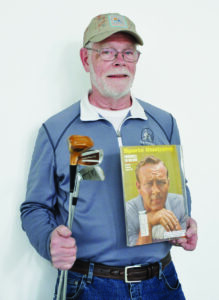 The Principal Charity Classic is a definite âgoâ for this year, and the annual PGA Champions pro golf tournament is scheduled to be held June 1-6 at Wakonda Club in Des Moines. Only a limited number of fans will be allowed, but barring the unthinkable, Rich Hoidahl will be there.

Per capita, Iowa has the fifth most golf courses in the nation, according to golf.com. The sportâs popularity here is further supported by the stellar crowds that turn out when big-time golf events arrive.

Hoidahl is an avid golf fan, but his passion has transformed him into a bonafide autograph hunter, tracking down golfâs most recognizable names. These sports celebrities have signed golf-related memorabilia such as golf cards, golf balls, golf caps, bobbleheads of golfers, golf tournament programs, past issues of Sports Illustrated with golfers on the cover, and even golf clubs.

âI have many interesting stories related to when and where I obtained these items and accompanying autographs,â he explains.

Hoidahl has a story linked to most of the items within his collection, but there is one amusing memory that cannot be tied to any tangible achievement.

âIâd never been to a professional tournament before,â remembers Hoidahl of his attendance at the U.S. Senior Open in 1999. âIt was very hot and humid.â After buying a program, Hoidahl decided to see if the pros would sign for him. Some wouldnât â Chi Chi Rodriguez, for example â but most did, and Hoidahl was excited about his haul, until he realized heâd made a rookie mistake. âBy the end of the day,â laughs Hoidahl, Iâd sweated so much Iâd smeared them all!â

One item that Hoidahl is especially proud of is his one-of-a-kind PCC Championsâ Cap. It is signed by every tournament winner, from the tournamentâs inception in 2001 (Jim Thorpe) through 2019 (Kevin Sutherland). The 2020 competition was cancelled, but when the PCC resumes in June, Hoidahl plans on continuing his collection. ♦

â¢ Be very polite when approaching a pro golfer; e.g., âMay I please have your autograph?â followed by âThank you and good luck in the tournament.â

â¢ Go on the ProAm days prior to the actual tournament days. The pros will more readily sign on days when their score doesnât affect their earnings. Try to approach the pros as they head to the driving range and putting green prior to teeing off.

â¢ During tournament rounds, do not approach a pro within 20-30 minutes of his tee time.

â¢ After tournament rounds, the pros will generally sign autographs in a designated area near the 18th green, such as the âAutograph Alleyâ at the PCC.

â¢ Bring a pen suitable for autographs, such as a Sharpie. Preferably not black or blue. The pros know that resellers prefer black or blue signatures. Pros often carry Sharpies in their own favorite color.

â¢ You will be more successful if you ask for an autograph on a cap, tournament program or sports card rather than on a golf ball. Many pros will not sign golf balls at all, especially for brands they donât play. They are difficult to sign and take more time than other items. Pros feel that balls they sign are much more likely to be sold.

â¢ Be patient. You may need to wait 30 minutes or longer to snag an autograph.

â¢ Donât ask for multiple autographs from one golfer. Give other autograph hunters a chance. ♦