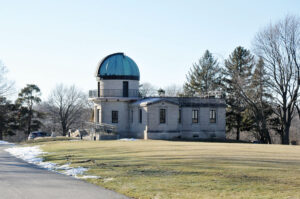 The Drake Municipal Observatory opened in 1921. Herb Schwartz has been part of the programming at the facility for more than 40 years. Photo by Jeff Pitts

Psst! Wanna know about a century-old local secret? Have you ever wondered about the copper-domed building with limestone walls that sits between fairways on Waveland Golf Course?

Thatâs the Drake Municipal Observatory. Not only is it an architectural curiosity, but in order to stay protected from errant golf balls, the building is outfitted with bulletproof windows â making it, in all likelihood, the only observatory in the world with that distinction.

The local star-gazing hotspot offers central Iowa residents the means to peer deep into the infinite night skies. According to Herb Schwartz, who has been involved with the programming at the observatory for more than 40 years, the observatory is an unusual gem that began when Drake University struck a deal with the City of Des Moines.

The city furnished a quarter-acre of ground along with the bulk of the funds to construct the building. In exchange, Drake agreed to chip in the scientific instruments, telescopes and staff, while also maintaining the buildingâs interior and hosting open-to-the public educational programs. The city agreed to maintain the buildingâs exterior. 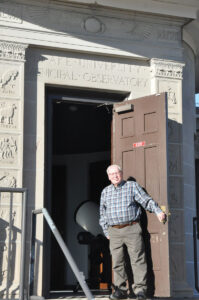 The facility was dedicated on Nov. 5, 1921, and Schwartz says this unique agreement between the city and the school has blossomed into a century-long relationship that still stands.

âThis was a research-grade observatory,â Schwartz says. âBut itâs open to the public for general education, and weâve been doing that for 100 years.â

Schwartz often gives the lectures himself, and his programming has gained a sizable following. When something notable happens in the sky, people know where to go, according to Schwartz. In a normal non-COVID year, he estimates that 3,000-3,500 people come through. Drake students help direct the public through the night skies while educating them about the solar system.

âThey do a tremendous job,â says Schwartz of his student helpers.

Daniel Walter Morehouse â Drakeâs sixth president and a well-reputed astronomer in his own right â was the driving force behind the creation of this, the nationâs first research-grade public observatory.

According to legend, Morehouse would cut the stadium lights at the halftimes of Drake football night games â a practice thatâd be frowned on nowadays â and the eccentric professor would commandeer the theater departmentâs spotlights and point out various constellations and intergalactic curiosities to adoring crowds.

Believe it or not, Morehouse loved looking at the sky so much that the professor and his wife, Myrtle, after death, had their remains cremated and interred in the Drake Municipal Observatory, where they remain to this day.

Schwartz hopes public stargazing can return to the observatory this summer, albeit in a limited capacity. But if not, then heâs pushing for next fall.

âThis is going to be 100 years old in November,â he says. âItâd be neat if we could get people involved to celebrate.â ♦