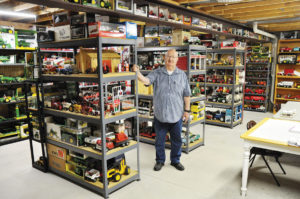 Dave Zaabelâs passion for miniature diecast toys is driven by the history and the details that led to their production. Photo by Jeff Pitts

âIâm a flea market nut,â explains Dave Zaabel while gesturing to rows and rows of shelving in his Urbandale basement. âFlea markets, antique shops, garage sales… but everything was canceled this year.â

Zaabelâs treasure trove contains a massive stockpile of toy farm machinery, replicas of bobcats, pickups, steam engines, jeeps and other diecast collectibles (toys that are models made by putting molten lead, zinc alloy or other substances in a mold to form a pre-designed shape). Zaabel says he lost count of the exact number in his possession, but the sea of brand-name replica tractors probably numbers 1,500 or more and consists of John Deere, Oliver, Ford, International, Case, New Holland and Massey Ferguson.

Sometime during the 1960s, while preparing to transition to a retirement home, Zaabelâs grandmother gifted him the toy tractor he played with during his boyhood visits to her home.

Then, at about that same time, Zaabel tagged along with his girlfriend to a flea market, and she gave him an instruction.

â âYou have to collect something, too,â â he remembers her telling him. âSo I looked down and there were some tractors and trucks, and I just started buying them.â

Thatâs due in large part to the stories woven into the history behind the replicas in his collection. These entertaining history lessons capture Zaabelâs imagination.

âDuring WWII, (a manufacturing plant in the Des Moines area) made 30- and 50-caliber bullets,â he says, pointing to something that came from there. âThis is scary,â he continues, âbut they made enough bullets at the plant to kill every person on the face of the earth.â

After the Allied forces achieved victory and ended WWII, the U.S. military maintained a fleet of 640,000 jeeps. These unique vehicles served a critical function while at war, but all of a sudden, they had few viable functions.

The junkers in the worst condition were dumped into the ocean. The rest were sold for whatever the flooded market would bear.

âYou could have bought a used jeep for $400 to $600.â he says. âYou could buy one brand-spanking new and still in its crate for $800.
One such built-to-scale, custom-made WWII jeep, with an exact replica of an armed forces shipping crate, sits in Zaabelâs home. This near perfect miniature duplicate is the only one of its kind, according to Zaabel.

âNotice on the jeeps, some have a circle around the star on the hood, and some donât,â he says. âThe Germans saw (the stars on the hoods), and they made a jeep and loaded it up with bombs, then they drove it into a camp and blew it up. What is going on in the world today, itâs not new, itâs just modified.â

To prevent this from happening again, the command people considered repainting the jeeps, but that would have been a huge and expensive undertaking.

âInstead, they said to put a circle around the star,â says Zaabel. âAnd then they gave specific instructions to the Air Force, if they saw any jeep without a circle on the star they had permission to blow it up. So that was your incentive to put the circle around it.â

He loves the details.

âHaving a hobby like this saved me during the (COVID-19) isolation,â he explains. âWhen we were all supposed to be in, I would be cleaning them and rearranging them and fixing them and doing other things. Iâd probably spend a couple of hours, two or three, maybe four hours a day.â

Then he points to the I-beams overhead that are packed with even more items.