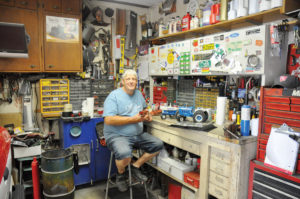 Bruce Youde started working on tractors as a child. Later he began collecting them, and he now has more than 5,000 in his toy tractor collection, as well as more than 20 of the life-sized versions.

As a young boy, Bruce Youde, of Polk City, acquired a miniature Ford tractor to use as a toy. That was his first. Now that it is five decades later, how many does he have?

That is not counting the more-than 20 fully functioning full-size models that he owns, maintains and uses. Eight large farm tractors, plus 13-14 garden tractors.

Where does Youde store all of his tractors?

âAll over,â he smiles, before adding that the massive collection contains many types of tractors in a wide variety of conditions. They fill his closets, his basement, his garage, and at least a few sheds.

In order to meet his tractor repair and storage needs, Youde has even added a paint shop and a machine shed to his home that was already equipped with a large garage.

Repair times vary for each project. The time it takes to restore them depends on what is needed.

âI used to be able to restore one big tractor a year,â he says, but he hasnât been able to keep that pace in a while.

Many of the toy tractors were bought in like-new condition and remain in the original packaging. Others require sandblasting, repairing, painting and replacement parts. He gets them at toy shows, toy stores, and from various dealers. In other words, he gets them wherever he can find them.

Does anyone have a bigger tractor collection?

âIâm sure there is someone,â he assures.

Youde doesnât have every model of every tractor ever made. He is sure of that, but he does have the first model that was given to him.

Re-selling is not something Youde does much of. He prefers to keep them and display them at the State Fair, or in his tractor club, or at various other venues. When he isnât fixing tractors, or acquiring tractors or showing them off, there is a good chance Youde is working with one of his tractors. Each of the big ones is used for a different purpose. One is for mowing, another for plowing snow or planting. Each has its own use, but racing is rarely on the agenda. The fastest tractor in Youdeâs fleet is equipped with cruise control and boasts top-end speed of 15 mph. The others max out at less than 10 mph.

Which reclamation project did Youde enjoy most?

âAny of them,â Youde says, adding that he likes a challenge. After all, he has been doing it for most of his life. The wrenching began on his familyâs farm, and it continued even once they moved off of it when he was 14.

âI have always been good at machinery,â he says.

Be that as it may, Youde only works on tractors, machinery and toy tractors. He doesnât do cars.
If the house was burning down along with all the storage and garages, and everybody with a heartbeat was already saved, what is the one thing Youde would go back for? Which tractor can he NOT live without?

âProbably my Fords,â he says, unable to narrow it down further. âAs many as I could get my arms around.â

Having all of these wheeled apparatuses around, Youde has no shortage of outlets for his spare time.

âI have more projects than a barrel of monkeys,â he laughs.

Bruce Youde likes it that way. ♦