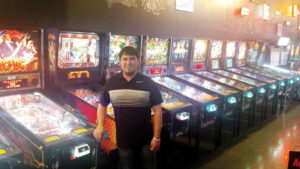 HISTORY LESSON: Pinball machines were originally made without flippers. Winning was a matter of chance, thus the flashy games were little more than well-lit gambling devices functioning as slot machines.

During the 1940s, these flipperless diversions were deemed hazardous to society and were banned in most major U.S. cities. The advent of the flipper in 1947 began to change how and why the game was played. It is commonly said that most, if not all, bans were lifted by 1976, which is when New York City finally ended its pinball machine prohibition.

PLAYER 1, YOU ARE UP

During the 12 months preceding Iowaâs 2018 State Championships put on by the International Flipper Pinball Association (IFPA), more than 11,000 pinball players played nationally in 2,000-plus competitions. Only 704 of these competitors remained eligible to win the 2018 national championship. But in order to advance to nationals, each player would first have to qualify by winning his or her state tournament.

Iowaâs 16 best flippers gathered in West Glenâs Operating Room on Jan. 20 for a one-day, March Madness-style single elimination tournament. The last man or woman standing would be called the state champion and represent Iowa in Las Vegas in March.

After a long day of flipping, the finals featured a showdown between Cody McQuiston and his friend, Sawyer Herweh.

LETâS GET READY TO PINBALL…

Each round of tournament play consists of a best-of-seven series.

âI was the top seed,â says McQuiston. âSo I could pick which game we played first, or I could pick to go second.â

Each of the seven games in the series must be played on a different type of pinball game. Differing skill sets
amongst the players and various levels of familiarity with the assorted games affect the playerâs ability to achieve high scores. As such, choosing which game to play, and in what order, is a significant part of the competition.

âI like to get out to a lead,â says McQuiston. âSo I picked a game I like (Game of Thrones).â

Despite his prowess, Herweh found a way to win.

The loser of the previous game gets to either choose what is played next or choose to play second â it is an advantage to know what score is needed win.

McQuiston opted to play second, and Herweh went for the jugular.

âHe picked Star Trek,â says McQuiston, âwhich is my worst game. Heâd beat me at my best, and he wanted to take an 0-2 advantage early, which is a big deal.â

With his back to the wall, McQuiston thwarted Herwehâs efforts and won.

Herweh deferred the choice for Game 3 in order to play second. McQuiston raced to a big lead on The Hobbit, his third favorite game, but Herweh rallied and managed to squeak out enough points to win on his third ball.

âThe rest of the games are kind of even for me,â says McQuiston, so he opted to play second. Herweh went with Metallica, but couldnât overcome two early multi balls by his opponent. McQuiston jumped out to an insurmountable lead and won.

After the loss, Herweh deferred, and McQuiston decided to mix things up.

âI just picked Ghostbusters,â he says, âwhich is probably my second worst game. Everyone hates Ghostbusters. There is no skill involved. Total luck. Itâs a war of attrition, and I just happened to win.â

It was now or never for Herweh. He dialed up his best game: Dialed In.

âHe had a bad first ball,â McQuiston says. âI sprinted off to another big lead on the first ball and just held on. It was a hold-on game.â

The victory sealed McQuistonâs championship and the opportunity to compete at nationals. He figures to be an underdog but appreciates the opportunity.

âThe bar pays the hotel, airfare, and it gave me free pinball for a year,â he says. âSo I want to show well for them.â