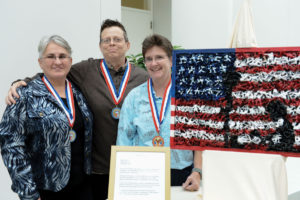 âMost of the time, my mom and I didn’t know where he was or if he was still alive,â says Wearmouth. âWe would go months without hearing from him.â

As a small child at the time, Wearmouth couldnât physically protect her brother, but she started pretending she could with little toy plastic soldiers. Her childhood hobby wasnât the reason her brother eventually arrived home safely, but he did.

In 1976, Wearmouth decided to take her hobby and make it into something more when she joined the Air Force. Her service later continued with the Iowa Air National Guard. She spent more than eight years as an aircraft mechanic working on B-52 bombers, A7s, C-131s and other transit aircraft.

âI was an assistant crew chief and mechanic on B-52 bombers and also the first woman on the flight line and in phase dock at Ellsworth Air Force Base, South Dakota,â she says. She also put in two years in the Army National Guard before stepping away from the military for a period of time. But on Sept. 11, 2001, when the towers were hitâ¦

âI decided, as I was watching the tragedy happen on TV, I was going back in,â she says. âSo I reenlisted in the Iowa Army National Guard.â

Wearmouth has since stepped aside from her service for good, but she is still playing with little toy soldiers. Combining her childhood hobby with her passion for military service, she and two other collaborators put together a piece of art that brought home the gold from the National Veterans Creative Arts Festival (NVCAF). The event is co-presented by the U.S. Department of Veterans Affairs and the American Legion Auxiliary (ALA) to reinforce the benefits of art therapy, to give veterans a creative outlet and to help veterans recover from and cope with physical and mental disabilities. This yearâs festival was held in Buffalo, New York. Participants advance to the national stage by winning contests at their local VA hospitals with assistance from ALA volunteers.

âThis was an all-expense-paid trip for gold medal winners,â says Wearmouth. âNot only did we participate in the festival, we also toured an art gallery, a museum and Niagara Falls, with a bonus trip into the falls on the Maid of the Mist. The week-long festival was an amazing and unforgettable experience.â

She says that art therapy is a way of expressing her thoughts, emotions, feelings and life experiences through different art modalities. The gold medal was awarded to a piece of art put together by Wearmouth, Terry Lewey and Tammy Campos. The trio honored their country, the flag and the ultimate cost of maintaining freedom with their award-winning piece, âFallen Soldiers.â

âWe built a flag out of a chalkboard, small toy soldiers. Painted a flag over them with a soldier’s cross painted within the flag,â Wearmouth says. âOriginally, we were going to stand the soldiers up but instead decided to lay them down to represent the ultimate sacrifice.â

Wearmouth has a long-standing relationship with the Des Moines VA â her primary medical caregiver since 1978.
âAt any time, 24/7, any need, want or emergency, they were there to support us,â says Wearmouth.

VA Central Iowa Health Care System has been approved to host the 2018 NVCAF, co-presented by the American Legion Auxiliary, in Des Moines during the week of Oct. 29 – Nov. 4. The VAâs mission is to fulfill President Lincoln’s promise: âTo care for him who shall have borne the battle, and for his widow, and his orphan.â ♦