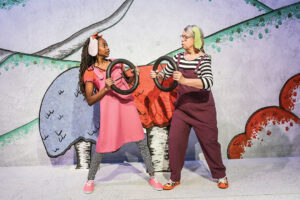 Each new year holds the annual promise of allowing us to refresh ourselves and sally forth into another 365 days of adventures. Regardless of age, many find a special joy in witnessing the reaction of children to creative wonders. The world of theatre is an especially vibrant gateway to imagination and creativity for young audience members, and the new year brings a new show and pending changes in one of Americaâs best programs â and, itâs right here in our own backyard. The Kate Goldman Childrenâs Theatre (KGCT) has introduced generations of children to the magic of live theatre.

The KGCT was added in 1995 to the converted 1934 Roosevelt (movie) Theater that housed the Des Moines Community Playhouse since 1953, quickly becoming a beacon of success for childrenâs theatre. To the imaginative eye, this black box theatre space seemed like a Seuss-ian expanded childrenâs playground for imagination, and the adaptive creativity of the showsâ scenic designs and costuming reflected this. The KGCT now prepares for its new evolution in 2023.

From a myriad of literature-based options

Just because a popular childrenâs book has been adapted to the stage does not mean it meets KGCT standards.

âWe look for classic childrenâs literature in addition to new works that have been adapted for the stage as both plays and musicals. We read scripts (good ones for childrenâs theatre can be hard to find!) and weigh titles that will balance well with the rest of the season,â explains Katy Merriman, Playhouse artistic director, adding, âIt is also important to have a show that is good for younger audiences and still engage middle to upper elementary/middle school ages. Lots of balancing.â

Each show offers a specially designed âP. Bill Jr.â for its young patrons. This interactive bonus program includes cast pictures, with bios and actor responses to kid-friendly questions. For Januaryâs âGo, Dog. Go!,â the question is, âIf you woke up tomorrow and had turned into a dog, what kind of dog would you be and why?â Add info about the original book, language and visual arts activities, STEM activities, and questions for children to ponder with adults, teachers or peers, and patrons have the gift of engaging live theater that gives well beyond the find bows â or, in this showâs case, âbow-wows.â

The KGCT legacy expands in 2023

This is the first time that the KGCT has produced âGo, Dog. Go!â Previous shows range from classics (âThe Lion, the Witch, and the Wardrobeâ and âCharlotteâs Webâ) to standards (Junie B. stories and âPippi Longstockingâ) to historical (âBoxcar Childrenâ and âLittle House on the Prairieâ). The vision for a dedicated performing space for childrenâs theatre was launched in 1992 when Jack Taylor evaluated possible areas for development to accommodate the burgeoning programming at the Playhouse. Not only was the board and staff surprised at his recommendation of a stand-apart childrenâs theatre, but the Playhouse board embraced this challenge. Its namesake, Kate Goldman, guided the programâs growth in the 1960s and 1970s, framing a vision for future success.

Following âGo, Dog. Go!,â âThe Hundred Dresses,â and âHow I Became a Pirate,â renovations of this space will begin. Shows will continue. Anchored by an innovative expansion of the performing hall, plans call for doubling the Playhouseâs classroom space and administrative offices. Building on its legacy into its second century, the Playhouse and KGCT embrace the present while planning for the future. That future is strongly anchored through its programming of engaging and introducing young people to the magic and vitality of live theatre, experiences that will prove beneficial throughout the rest of their lives.

âGo, Dog. Go!â is an apt metaphor for racing into the future

Adapted from the P.D. Eastman book of the same name by Allison Gregory and Steven Dietz, with music by Michael Koerner, this has become a popular childrenâs story. There is singing in the show and a live keyboard accompanying and underscoring nearly all of the show. Veteran keyboard artist Francine Griffith will be playing â from atop a dog house.

A hallmark of many of the childrenâs shows is casts that bring experienced adult and older children often working with newcomers to the stage. Many have benefitted from classes at the Playhouse, but that is not a prerequisite to be cast. Add a talented production team that wraps the entire production in a creative professional look, and audiences are in for another delightful immersion into an imaginative, literature-based world of theatrical expression.

After all, perhaps something better than being a cultural adventurer is teaching a child or grandchild how to be one. ♦