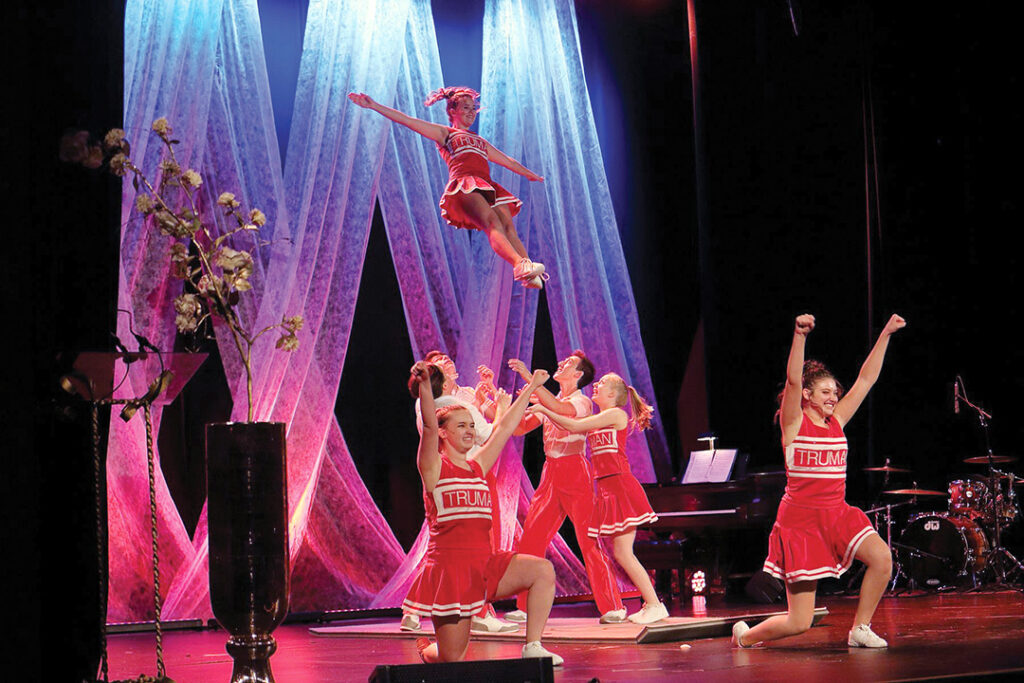 Des Moines Young Artistsâ Theatre performs a musical number from their recent production of âBring It Onâ at the 2018 Cloris Awards at Hoyt Sherman Place Theatre. Photo by Dan Welk

Central Iowa continues to celebrate a special Oscar-winning actress who continued to maintain a strong relationship with her hometown, Des Moines. Cloris Leachman departed this mortal stage in January of 2021, joining a celestial band of fellow performers and luminaries. One special legacy she left behind was her support and endorsement of the regionâs premier stage production awards: The Cloris Leachman Excellence in Theatre Arts Awards.

Since its inaugural celebration in 2015, The Clorises have bestowed recognition to participating theatre companies in the Greater Des Moines area for their work. A group of qualified judges attend the shows throughout each season (defined as qualifying productions happening between Aug. 1 through the following July 31), compiling their adjudications through a regimen of guidelines. These guidelines have been developed through collaboration with a group of representatives from each participating company.

As many as 11 theatre companies have participated each year, depending upon schedules and ambitions of some of the independent companies. Dozens of productions fill the season, giving fans of live theatre a bounty from which to select.

The initial two events were held in the Kum & Go Theatre of the now-defunct Des Moines Social Club. Response for this gathering of kindred spirits soared, and the event quickly outgrew that space. Hoyt Sherman Place Foundation invited the Cloris Awards committee to use its theater, while also serving as fiscal agent for underwriters. The show did go on.

Until 2020. When the pandemic hit the world, live theatre was one of countless cultural casualties. The 2020 Cloris Awards were suspended, as judging only half a season would not be fair. The 2021 event was held virtually, with many unique awards being given in recognition of innovative ways that companies that did produce shows did so in responsible ways to keep their audiences and production personnel safe. A cautious return to a new normalcy evolved during this current season, and plans for an innovative Cloris Awards were laid.

An end-of-summer celebration seems only best when held outdoors, and the folks in West Des Moines have agreed to host this yearâs Cloris Awards at the sublime setting of the Jamie Hurd Amphitheater on Sunday, Aug. 28 (with a rain date of Aug. 29). This will be an open invitation for a true âSunday in the park with Georgeâ â¦ and, anyone else who wants to drink in the enthusiasm of Central Iowaâs theatre scene. Expect recognition, performances and the chance to interact with many of our regionâs performing arts creatives.

This season ramped up significantly in producing shows from the COVID-truncated 2019-2020 season. Eleven theater companies received special âDIY Cloris Awards,â as only 27 of the 45 Cloris-eligible shows were staged in 2019-2020. The participating unanimously agreed to stand in solidarity with those unable to produce and honor the efforts that were made through the âdo-it-yourselfâ recognition of how each company kept the flames of future shows burning.

Due to COVID, the Cloris Awards were suspended for the 2021 event. The 2022 Cloris Awards will represent a bounty of season-filling productions, from world premieres to musicals to plays to childrenâs theatre. Seven companies presented 36 productions to tens of thousands of patrons from August 2021 through July 2022. These productions were delivered mostly by a cadre of dedicated volunteers: on stage, in production work, as ushers, and more. They engage in working on shows beyond their personal passions, but to share performance art with the community. The audiences they served should attend the Cloris Awards, as they contributed to the process. They will enjoy reliving some select scenes performed and appreciate the recognition bestowed upon stellar theatre arts from the past season.