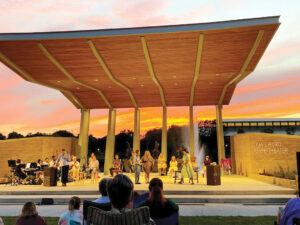 Tallgrass Theatre Company presents a concert version of âThe Bridges of Madison Countyâ at the Jamie Hurd Amphitheater in West Des Moines in 2021. They will present âInto the Woodsâ there this season. Photo by Megan Helmers

In an interesting pondering of name origins, tallgrass prairie âis capable of supporting significant biodiversity. Parts of the ecoregion are among the top ten ecoregions for reptiles, birds, butterflies, and tree species.â

Tallgrass Theatre Company (TTC) draws from that description, having sunken its roots deep into the West Des Moines community 20 years ago. Just as there is a movement to renew long-gone prairies with their tallgrasses, TTC has enhanced its communityâs cultural wellness with a steady, artistically appealing range of performing arts programming. Last year, a new variety popped through its cultural soil: its first musical theatre concerts at the Jamie Hurd Amphitheater on the City/School Campus, just one year after that new venue was christened. âThe Bridges of Madison County: The Concert Versionâ (June) and âAn Evening with Sondheimâ (July) were resounding hits, and a new tradition was ready to grow. Get ready for this summerâs âInto the Woods.â

The concerts were a combination of pragmatism and an irresistible itch to get shows up and going again for this intrepid company. Their new performing hall would not be ready in 2021 for a show, the pandemic had quashed many productions during the height of its impact, and that venue was an intimate setting, not one suited for large musical theatre productions. TTC wanted to let central Iowa know that they did not disappear. They were ready to make their presence known.

âTTC already had a good working collaboration with West Des Moines Parks and Recreation with the Seedlings program,â said Tom Perrine, the companyâs artistic director. The Seedlings program was an established childrenâs theater program, introducing young ones to the benefits and appeal of performing arts.

âThe (Jamie Hurd) Amphitheater was still fairly new, and everyone involved agreed that this was a great opportunity. Producing a musical event at the Amphitheater helped ease the concerns of audience members being seated in a closed theatre during a pandemic â being outdoors with plenty of seating area just seemed like a smart way to bring audience members back to live theatre.â

Their instinct proved correct. TTC drew a stellar performing ensemble, and the hills truly were alive with the sound of music for their Sondheim show. Enter 2022. Another opportunity, and one the region is already eagerly anticipating. âInto the Woodsâ brings all the brilliance of Sondheimâs music to life in a format that TTC can successfully produce. A hallmark of their steady growth includes many Cloris Award-winning shows, presented in their signature, intimate settings. While an amphitheater setting may not seem intimate, it is a refreshing and welcome expansion of TTC programming.

Lest anyone considering attending believes this is merely performers standing on stage singing songs, Perrine wants to educate.

âProducing a musical âconcertâ performance is not much different than a fully staged production,â he explained. âThe costs for the rights for the show are the same, we are performing the entire show â all the dialogue, all of the music, memorized (as opposed to performing with librettos in hand). The rehearsal period is intense. There will be live musicians, all local. The production will be staged with minimal suggested costumes, some hands props, no scenery.

âWe are adding a third evening for âInto the Woodsâ â June 16, 17 and 18,â Perrine continued. âA âconcertâ version allows us to focus on the music, and the phenomenal amount of talented singers in the area.â

So, while not wandering into any real wooded areas, this sounds like a perfect destination to experience one of Sondheimâs great works. A rain date will be June 22.

The Des Moines Community Playhouse and Pyramid Theatre Company continue the growing series of cultural cross-pollinations in our community. Beaufield Berryâs âBuffalo Women, A Black Cowgirl Musical Dramedyâ opens Juneteenth and will be presented through June 26. It was workshopped at Omahaâs Blue Barn Theatre in 2021. Now, central Iowa will have the opportunity to explore its rich historical themes: âJuneteenth. New lives. New freedoms.â This captivating show delivers tales of black women of the frontier in the days after Juneteenth, finding a girl, faith, and their way. âBuffalo Womenâ is a tale of hidden figures living extraordinary lives on the frontier in 1865. Many have heard of the Buffalo Soldiers â take a more expansive dive into some fascinating history. ♦