âHamiltonâ storms back into Des Moines for extended run 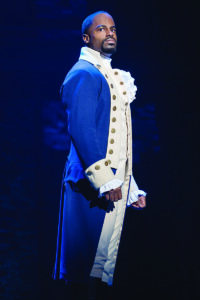 Jared Dixon as Aaron Burr in âHAMILTON National Tour.â On stage at the Civic Center, May 17 â June 5. Photo by Joan Marcus.

With an allure that still resonates from its sold-out run at Des Moines Performing Arts in 2018, âHamiltonâ returns, expanding from that initial week-long stay to present this Broadway hit for three weeks beginning May 17. It has won Tony, Grammy and Olivier awards, the Pulitzer Prize for Drama, and an unprecedented special citation from the Kennedy Center Honors. Audiences already are salivating for this powerful showâs return.

âHamiltonâ bills itself as âthe story of America then, told by America now.â The well-documented story of its creation by Lin-Manuel Miranda, inspired by the Ron Chernowâs biography of the showâs title character, is compelling. The history to stage leap is a masterfully unique vision by Miranda, giving the world a timely, thought-provoking show.

Jared Dixon plays Aaron Burr in this national tour, giving some thoughts about this show and his career â including, his return to Des Moines. He was in the 2017 national tour of âThe Color Purple,â and he quickly ticked off things he looks forward to, such as Zombie Burgers and pickup basketball games at the YMCA.

Dixon shared fond memories about the beginning of his professional career.

âMy father was a member of the original production of âRagtimeâ on Broadway, as well as the pre-production development of the show in Toronto. He covered (the role of) Booker T. Washington; (âRagtimeâ was) my first professional role. I had the honor of playing that role.â

His path to joining the âHamiltonâ cast was not a direct one. He auditioned early, when it was first on Broadway, as an original company replacement. That didnât work out. He auditioned through the company offices for a part that would have covered Lafayette/Jefferson and Aaron Burr. Fast forward, during which Dixon performed major roles in âThe Color Purple.â He had just accepted a role in âThe Lion Kingâ when he got a call from the âHamiltonâ producers to play Aaron Burr. He had to decline, but when he completed his âLion Kingâ contract, the role opened up a week later in âHamilton.â It seems that destiny would eventually call for Dixon as Aaron Burr in âHamilton.â

âThe timing of âHamiltonâ in American history is how it stands for the DNA of America and what American ideals are structured out of, that we were a young, scrappy country and still are,â Dixon offered. âIn a lot of ways, we are still finding our identity, and âHamiltonâ shows that, at the heart of America, is Americans.â He continued by asking, ââ¦if we define ourselves from the worst of our actions or the best of our actions. Is it the best of us, or the worst of us? I would say, honestly, itâs a little bit of both. We are a country that hopefully is continuing to fight, that we can be great as a community of people, and we can aspire to be great as individuals, no matter what our past is or where we come from. The legacy that we leave as people is a lot stronger than the small moments leading up to that legacy.â

There are many special motivations driving the power and impact of âHamilton.â In a 2020 Keely Ogley article, Miranda offered, âJust the hustle and ambition it took to get him off the island [â¦] That is part and parcel with the hip-hop narrative: writing your way out of your circumstances, writing the future you want to see for yourself.â

For Dixon, â âHamiltonâ is about forgiving people for their transgressions, and putting our best foot forward so that our kids and our kidsâ kids can come into a world just a little bit better than we left it.â

âHamiltonâ is not to be missed, and many eagerly await the chance to see it again. The New York Times proclaims that this âtheatrical landmark has transformed theater and the way we think about history.â