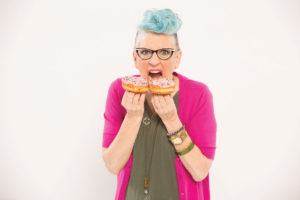 The beauty of living in a land of rugged winters is finding the indoor options that beckon to sweep us into compelling stories, rollicking comedies or even interactive experiences. February is filled with plenty of options, from national touring productions on the Civic Center stage to excellent locally produced options for youth through older audiences, from G-rated to âGee, did you see this show?â Be a cultural adventurer and sally forth into the chilly wilderness of this season, allowing the power and talent to warm you to the very core of your aesthetic sensibilities.

Lisa Lampanelli has evolved from the raw standup comic that gained so much visibility to a new place in her creative journey. âLisa Lampanelliâs Losinâ Itâ is a special mile marker in that evolution, bringing an identifiable, engaging and entertaining show to central Iowa audiences as part of the Temple Theaterâs Comedy Series, under the Des Moines Performing Arts umbrella.

âI decided stand-up comedy really wasnât for me anymore. It wasnât making my heart happy,â Lampanelli described her tour. âSo, I created âLOSINâ IT!,â a show using comedy to talk about weight and body issues, which are things Iâve struggled with for years. This is so much more fulfilling.â

Lampanelliâs show includes three friends who create a flexible, responsive synergy built around the framework of the showâs script. Each show is filled with audience participation questions, so each delivers its own nuances and energy. Lampanelli expands what audience members who know her from her standup work can expect.

âItâs really an about face. When I really think about it, itâs a natural extension. It has some heartfelt qualities, because over the years it seemed obvious to meâ¦that I can do a heartfelt show and use all my skills plus do something extra which is: People can take away the message that weâre all struggling, weâre all going through it, and, if we can laugh at it, we can work with it.

âI have no reservations about saying Iâm so proud of it (the show). It feels pretty good,â she said.

On another part of the content spectrum is âThe Boy at the Edge of Everything,â presented by Des Moines Young Artistsâ Theatre (DMYAT).
Described as âinterstellar realism,â this production promises a special journey, especially for younger audiences, as DMYAT presents the Iowa premiere of internationally acclaimed playwright Finegan Kruckemeyerâs story about a family that may seem very familiar to the audience as the script takes audiences on a theatrical, imaginative and inspiring story about a boy whose dreams reach into boundless realms.

As David A. Vancleave, the showâs director and DMYAT artistic director writes on their website, â âThe Boy at the Edge of Everythingâ tells the story of 12-year-old Simon Ives, who just longs for some space. Between music lessons, soccer, Taekwondo, homework, younger brothers, Dad jokes, and more homework, he canât find the chance to just stop and be. Meanwhile, at the edge of the universe lives a Boy, lonely and bored. After an unlikely series of events (involving a meditation tank and lots and lots of fireworks), their worlds collide and neither will ever be the same.â