Youth and family shows are front and center

Two shows feature the talents of about 60 students. 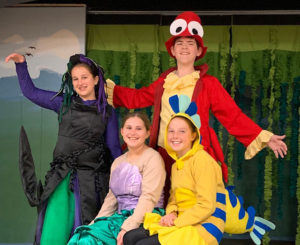 âDisneyâs Little Mermaid Jrâ and âSeussical Jr.â will be featured productions in the Greater Des Moines theater scene during November, thanks to Class Act Productions (CAP) Community Theatre in Altoona and Des Moines Young Artistsâ Theatre, respectively. Combined, these two shows feature the talents of about 60 students. Stir them into two beloved children themes, and these two shows are sure to have plenty of âbox office appeal.â

The story lines are familiar to audiences, making both shows appealing for the core family audiences expected to be drawn to each. âSuessical Jr.â is a 70-minute journey that takes audiences to the Jungle of Nool, the Circus McGurkus and McElligottâs Pool as Solla Sollew, as Horton, along with his friends JoJo and Gertrude McFuzz, learn the powers of friendship, loyalty and the imagination. âDisneyâs The Little Mermaid Jrâ follows the journey of Ariel and her underwater friends as she pursues love in a world far different from hers âunder the sea.â This adaptation of the story provides a shorter performance time, yet captures the heart and soul of these memorable characters and their adventures.

While there are plenty of similarities between these two companies, each has its own mission and niche. CAP promotes itself as a teaching theater, where much of their work focuses on providing a safe, nurturing environment for students, beginning at age 7, to explore the world of performance. Participants gain confidence, learn about teamwork and more.

Jolene Gentzler serves as assistant director for CAPâs âDisneyâs The Little Mermaid Jr.â She has been part of their board and operations development and provides some insights into their process through her role with this show.

Alison Keeler, who plays the role of Ursula in âDisneyâs The Little Mermaid Jr,â is an eighth grader now. She first auditioned for shows at CAP when she was 7, the youngest age for those seeking roles in shows. CAP does offer two âLunch & Laughâ shows (in December and March), geared for young patrons ages 4 and older, plus their parents and grandparents.

âI was 7 when I first auditioned, and I kept trying until I got in (a show),â Keeler shares.

She has been able to develop her skills and has worked into getting cast in leading roles. She talked about playing the villain of the show, Ursula.

âI sometimes donât think Iâm mean enough.â When asked what the director said about if her character was mean enough, she continued, âWell, I havenât gotten any notes about that.â

Dipping into another popular imaginary realm of childrenâs literature is Des Moines Young Artistsâ Theatre (DMYAT) as they present their next show, âSeussical Jr.â Under the guidance of Executive Artistic Director David A. VanCleave, DMYAT has developed into an innovative organization dedicated to introducing students to the âtransformative power of live theater and the arts.â Its programming opportunities draw students in from dozens of schools and introduces them to any and all aspects of theater production they wish to engage: acting, singing, directing, production, lighting, sound.

âItâs an immersive way to inspire each student who comes to DMYAT to learn from the process and carry it with them the rest of their lives,â said VanCleave.

Both shows are excellent gateways for families to see what is being offered in their community, both from a patron and a participant perspective. Besides, both shows will be grand live performance adventures.