A tribute to one of our communityâs theatrical finest 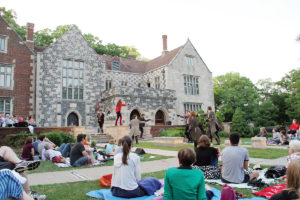 Scene from 2018 Shakespeare on the Lawn production at Salisbury House and Gardens, âRomeo and Juliet.â Photo by Andrea Markowski.

The adage goes that itâs the â-â connecting a personâs birth and death that counts. Jeanne Marie (Ferris) Hopsonâs âdashâ was a super microchip filled with enough achievements and contributions to fill several lives. Her passing leaves a vibrant legacy in its wake.

A Des Moines native and Roosevelt High School graduate, Hopson was immersed in the world of performing arts. She was a believer and practitioner of the transformative power of theater to shape and to guide the lives of others, especially young people. She worked as an equity and non-equity actor and performed in more than 50 productions in five Midwestern cities. Like a âJeanne Appleseed,â she spread her talents and inspirational presence at the Des Moines Community Playhouse, Charlieâs Showplace, The Drama Workshop, Childrenâs Theater and Theater of Western Springs, Childrenâs Theater and Theater in the Round in Minneapolis, and the La Crosse Family Playhouse and School, which she founded. Her inspirational seeds will continue her legacy well into the future.

She has received numerous awards, including being the first woman named a Des Moines Community Playhouse Legend and national recognition in being twice awarded AATEâs âMost Outstanding New Childrenâs Theater in the United States and Canada.â

Hopson adjudicated for the Iowa High School Musical Theatre Awards for Des Moines Performing Arts. She served as a judge for the Greater Des Moines Cloris Leachman Excellence in Theatre Arts Awards. She worked on the scholarship committee for performing arts for the Des Moines Womanâs Club.

Many theater lights will dim in honor of Jeanne Hopsonâs passing. Her legacy, however, will continue to shine brighter than ever. Her glowing presence will be missed. Adieu, sweet Jeanne.

âDoing Shakespeare at Salisbury is such a magical experience,â exclaims veteran Director Brad Dell about this yearâs offering from Iowa Stage Theatre Company. âThe House and Gardens provide a sumptuous backdrop as rich as the bardâs own luxurious words.â

âThe Tragedy of Macbeth,â the full title of William Shakespeareâs shortest tragedy, is a story filled with characters well-known to the world. Under Dellâs masterful interpretive abilities and in the hands of the high-caliber cast and production values for which Iowa Stage is known, this promises to be another fine evening of outdoor theater.

âMacbethâ delivers a timeless tale of power seekers for powerâs sake and dramatically captures the damaging psychological and physical effects of political ambition.

âShakespeareâs thrilling plays truly come alive with the magnificent backdrop of Salisbury House,â says Matthew McIver, ISTC artistic director, âand the audiences experience Shakespeare the way his audiences did â outside, in a crowd surrounded by a fabulous environment.â

One of Pyramidâs founders returns with his play âToo Heavy for Your Pocket.â JirÃ©h Breon Holder is currently the Playwriting Fellow of the Department of Theater and Creative Writing at Emory University, bringing his national relevance to Pyramidâs Central Iowa presentations. His career continues to grow, and our community benefits through the Pyramid relationship with this critically praised artist. Holder is ââ¦a firm believer that art changes lives.â Each project he is involved with seeks to touch people one audience at a time.

August Wilsonâs âHow I Learned What I Learned,â a one-man tour de force about the life of the playwright, is the second offering for this season. One of Iowaâs most evocative and powerful stage performers, Aaron Smith brings this show to vibrant life as he portrays the life of an incredible playwright.