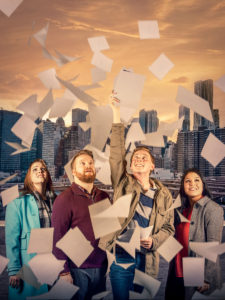 Mentioning musical theater to someone often evokes images of lavish costuming, intricate production numbers filling the stage and rafter-rattling musical numbers. The past few decades have ushered in a counter-appeal to the big Broadway musical. These new musicals often have small casts which seductively draw their audiences into contemporary themes. âOrdinary Daysâ is such a musical and is the latest offering through Tallgrass Theatre Companyâs unique Dream Project.

The Dream Project premise is simple. Candidates submit proposals to the Tallgrass Theatre Company for consideration of their dream show. This allows regional performing artists to control the production choice, which is not the case with the traditional producersâ model. Traditionally, actors hope that a new season will hold a show that fits their passion, be it the show, the time in their performing career, or even fitting into their work schedule. Yes, Virginia, virtually all who perform in area shows volunteer their time. And, yes, there is a Santa Claus, thanks to Tallgrass.

â âOrdinary Daysâ is an intimate, heartfelt look at the ways in which four young people connect and intersect in a city of 8 million people,â explains the productionâs director and choreographer, Megan Helmers. âSome know each other, some are meeting for the first time, and some will never meet, but each of them comes to affect the othersâ lives in some way â whether they know it or not.â

When asked about her diverse and eclectic performing arts career, Helmers said that âa diverse background in the performing arts has led me to this project in interesting ways. âOrdinary Daysâ is only the second musical Tallgrass has produced. In their first musical, âEating Raoulâ (2013), Charlie (Reese) and I played opposite each other in the lead roles. Since then Iâve done much more directing and choreographing than performing.â

This show will feature a quartet of dynamic musical theater performers, including Reese, who is a Cloris Awards winner for his role as Dr. Frankenstein in the Des Moines Playhouseâs âYoung Frankenstein.â Helmers, herself a Cloris Award winner for her choreography in Des Moines Young Artistsâ Theatreâs âBring It On The Musical,â offered, âCharlie is really terrific at exploring whatâs beneath the text. His face is so expressive that you know at a glance what his character is thinking.â She added, âIâm happy to say we have not just one, but four incredible voices in our cast. Taylor Weaver, Sydney Allen and Keaton Lane are playing Claire, Deb and Warren, and when you add Charlie (Jason) to the mix, I think the audience will be blown away by the talent in this production.â

Thanks to the vision of the Tallgrass team and the talents of Megan Helmers and her cast, you wonât have to travel to one of 200-plus other international productions of âOrdinary Days,â including shows in Japan, Australia, South America and Poland. You can savor the wonderful nuances, modern relevance and lyrical wit imbued in Gwonâs memorable âOrdinary Daysâ at the Tallgrass Theatre Companyâs home, the Rex Mathes auditorium, 1401 Vine St., West Des Moines. This intimate performing venue has been praised by its audiences for the wonderful performance experiences it delivers, and a musical such as this should, indeed, be a âDreamâ to experience. For more information, visit www.tallgrasstheatre.org/event/096f8978976e2af4e344ff06b66a0e75.