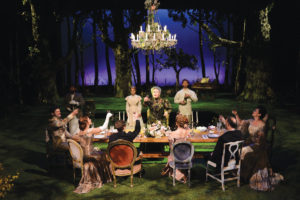 Perhaps the most difficult ticket to get this summer wonât be for a pop concert or sporting event. It will be to the prime performing nights for the 2018 internationally acclaimed Des Moines Metro Opera (DMMO) season. Patrons travel to Indianola from nearly 40 states for an immersion into one of Americaâs most cathartic opera experiences. Act now, and you can still get your ticket.

For principals (artists in leading roles), Egel aims to secure the highest quality vocalists, both established veterans for certain roles as well as major emerging professional talent. Established vocalists often have credits from the worldâs major opera companies. For emerging talent, Egel recruits from winners of major competitions, graduates of leading post-masterâs degree programs at major music schools and other sources to meet the demanding performance needs and standards for DMMO.

âAs a festival, weâve been able to capitalize on the energy that comes with that operational model,â Egel shares. âWe include four opera productions, dozens of free concerts, lectures and events. Artistically, we can be more adventurous in our programming, including contemporary American works or works from time periods.â

First-timers should prepare for an eye-opening and soul-stirring experience. Egel enthusiastically shares, âI believe that design and visual elements of opera are just as critical as the singing and story-telling, and so weâve done more producing of new sets, costumes and video design in a variety of ways. I think visual artists of the 21st century appreciate the canvas that opera provides and working with contemporary designers in our theatre allows us to showcase the many and diverse voices that participate in the overall panoply that goes into producing work on this scale.â

This season includes âDie Fledermaus,â âRusalka,â âThe Tender Land,â and âFlight,â from June 22 through July 15. Before the main season, the tremendously popular Peanut Butter and Puccinni series presents the classic fairy tale, âJack & the Beanstalk,â June 14-16. The $10 ticket includes the show, a behind-the-scenes tour of the theater and lunch.

The deep appreciation that artists and production teams have for this special operation is captured by the grateful DMMO audiences. Egel identifies adventurous programming, a focus on emerging talent and one of the most uniquely shaped theatrical playing spaces as key pillars to DMMOâs success. The 467-seat Pote Theater has an intimacy that large performing halls lack, adding to the magic of the DMMO experience.

âWeâve succeeded in becoming a preferred spot for artists of an increasingly high caliber,â Egel proudly shares. âLast season, the Chicago Tribune gave us a front page of the A&E section in review with a headline âWorld Class Opera Grows Tall, Proud in Cornbelt.â â The Chicago Tribune further stated, âFor the past 45 years, the Des Moines Metro Opera has produced an annual festival that is among the oldest and most enterprising summer opera fests in the nation.â

A gauge of peer respect is reflected through colleagues from nearly 15 American opera companies choosing to spend their companiesâ travel dollars coming to Des Moines to see what DMMO does. This respect that industry insiders, as well as the patrons, have for what DMMO invests into each production, each program, each process â that is the cultural harvest reaped by DMMO. 2018 promises to be another bountiful season. http://desmoinesmetroopera.org

OVERHEARD IN THE LOBBY: