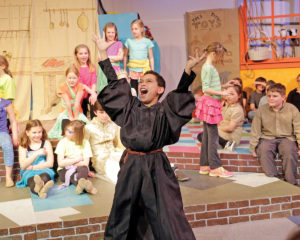 Local youth plays and workshops likely wonât be a fast track to stardom, a short cut to a Tony Award, or the building of an adoring fan base. For the increasing number of youthful participants, however, their reasons for involvement define the appeal and melting pot meeting point of performing arts. The Des Moines Playhouse, Des Moines Young Artistsâ Theatre, Class Act Productions, and Ankeny Community Theatre all encourage this.

Central Iowa is anchored by one of Americaâs most respected and long-lived childrenâs theatre programs: the Des Moines Community Playhouse. Nationally recognized and celebrating its centennial in 2019, the Playhouse started producing Theatre for Young People shows in the 1950s. Programming took a major leap forward with the founding of the Kate Goldman Childrenâs Theatre (KGCT) in 1995. Presenting popular literature-based shows, tens of thousands of families have treasured the magic of favorite books coming to life on stage.

With humble beginnings in 2008, the vision created by Bob and Maria Filippone grew from occasional shows at the Unitarian Church on Bell Avenue into Des Moines Onstage, then into Des Moines Young Artistsâ Theatre (DMYAT). David Van Cleave shares the core principle behind DMYAT ââ¦we believe our organization belongs to the students themselves. We know that the youth of this city are capable of great artistry, empathy and creation. We are happy to support them on this journey by providing a home and treating them as artists, first, and students second.â
Class Act Productions (CAP) started in 2006 with a production of âCinderella.â This season will mark their 41st mainstage show. Board President Melissa Grooters described CAP as a group â…(that) produces childrenâs theatre, but the end product (performance) isnât why we produce childrenâs theatre. What makes our role unique is we are an organization focused on being a safe place for our children to grow and learn.â

CAP calls a repurposed historic building in âOld Altoonaâ home. This intimate space creates a bonding experience for audience, cast, crew and CAP team alike. CAPâs Board includes in their Belief Statement: âWe challenge your children to be confident, expressive and genuine. We just happen to do childrenâs theatre.â

Ankeny Community Theatre (ACT) was founded in 1981 but started producing programming specifically for children only recently. This facet of ACT solidified when a partnership between them and Ankenyâs Kirkendall Library utilized library space for free workshops (25 last year alone), with hundreds of youth participating. These workshops have increased interest in ACTâs summer camps.