Thursday, February 2, 2023
Join our email blast
Cars in the City 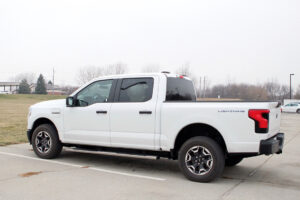 When electric vehicles hit the market, a small Prius was one of the first. Now, a pickup truck double the size is available with the Ford F-150 Lightning. Debuting in 2022, itâs the second pickup truck to be all electric (the Rivian R1T was first).

I test drove a Lightning commercial pro, an entry-level vehicle, but with a surprisingly low price tag of $41,769. With four different trim levels, you can pay up to $92,669 with an extended-range battery, which runs an extra $10,000.

As weâve featured a regular Ford F-150, these trucks are similar in comfort, trim and other features. This crew cab comes with 5.5-foot bed. If you think you need more room for storage, use the frunk (yes, itâs a word meaning âfront trunkâ). Since thereâs no engine, thereâs extra storage, plus four 120-volt outlets â for a total of eight outlets. Ford claims that, when fully charged, its pick-up truck could power a house for up to three days.

The Co-Pilot 360 is standard tech on all models and includes collision assistance with auto braking, pedestrian detection, rearview camera and more. Got a passenger in the back seat? The info screen reminds you to check on them when the vehicle stops. 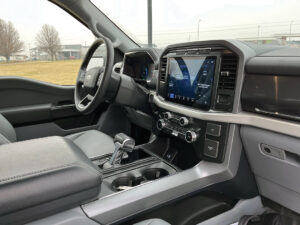 This electric truck has power. With two electric motors and two battery packs, the maximum towing is 5,000 pounds, plus more if you have an extended range battery. In comparison, a regular Ford F-150 V6 tows 9,000 pounds.

The big question is â how long does the charge last? This model runs about 230 miles per full charge. The truck tells you how many miles are left, based on braking, outside temperature or other variables. I think I got an âAâ on my test, as my brake score was 99%, while my driving score was 93%.

But, remember, you donât just pop open the gas tank and fill up in five minutes (or, if youâre in line at Costco, make that 25 minutes). At a 150-kilowatt fast charge station, you can get 41 miles for a 10-minute charge. A regular charge station gets you 19 miles in one hour. Or, plug in overnight for a full charge.

To demonstrate charging, Fordâs commercial manager looked up a charging station on her FordPass app. As we drove to Hy-Vee in Waukee, both charging stations were occupied. Not knowing how long the wait would be, we knocked on a ladyâs car door as her car was charging. Sheâd sat there about an hour and had about three hours left before a full charge. 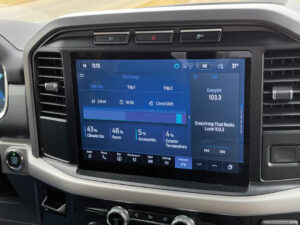 Do we wait? Is there a limit on charging time? Thatâs the potential problem. If you only have a few miles left, the same scenario could happen again, although the app should indicate available stations. Right now, Ford cannot plug into Tesla superchargers.

It isnât all on the automaker to solve this problem. The state of Iowa has $51 million in federal money over the next five years to fund the national electric vehicle infrastructure law. In addition, MidAmerican Energy is constructing charging station networks across Iowa, roughly within 50 miles of each other.

A Ford Lightning is nearly identical to the regular F-150 with regards to features. If you plan it right with your charging schedule, itâs a great first step in preserving the environment, saving some cash and getting your pickup truck fix. ♦