Thursday, December 1, 2022
Join our email blast
Cars in the City 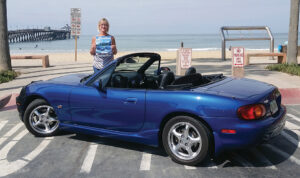 As a new couple, Mike and Lori Russell searched for date-night activities. They drove Loriâs blue Mazda Miata to a movie in the park event. As they parked their car, another couple in a Miata immediately approached the Russells, introducing themselves. They were part of a Miata ownersâ group and invited them to an event.

The Russells accepted the invite and met the next week with a half dozen other Miata owners at Summerset Winery. As they bonded over the love of their small sports cars, Lori and Mike joined the Heart of Iowa Miata Club Owners 10 years ago.

The group consists of about 30 cars with more than 60 active members. Car models range from 1992-2021, with red as the most popular color.

A mix of mostly retired folks participate in the monthly drive-and-dines. Members suggest a place to motor their Miatas to. Popular places are drives about 30-60 minutes from a set destination. The more scenic and rolling hills, along with tight curves, the better. 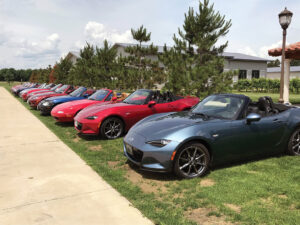 Each year, the group plans a sideways tour. Itâs loosely based on the movie âSidewaysâ involving a trip to wine country. The sideways tour visits local places where members can travel in a day. Previous sideways destinations included Galena, Door County, Omaha, Red Wing, the Amana colonies and more.

âWe try to stay off the main roads and take the scenic byways. We stop along the way for unusual or scenic stops,â Mike explained.

At their destination, theyâll schedule a few day trips, often to wineries, breweries and tourist attractions.

The most challenging part of the drive is keeping 20 or so cars together. On long trips, theyâll have designated stops, often joking about âsmall bladderâ stops. Some folks drive faster than others, while stoplights and traffic can separate the cars. When they arrive in town, people stop to view a colorful parade of zippy, small sports cars.

âSome people stop and let us all pass by,â Lori said. âWe have kids and adults waving at us like weâre celebrities.â

Another activity members participate in is a scavenger hunt. During the summer, owners receive a point for each item they find, such as each letter of the alphabet for a town. Pictures of the Miata next to the sign validate the find, and prizes are awarded at a year-end celebration.

The Russells were so enthused about the local scavenger hunt, they entered a national contest, the Moss Motor Challenge, in 2017 and earned first place. There were more than 200 things to find, including roadside oddities, a giant pitchfork, a castle and more.

That summer found the Russells discovering wonderful new places across the U.S.

âWe saw the mountains, the ocean â we went all over the country,â Mike said.

In addition to exploring the U.S., theyâve gained lifelong friends through the group.

âThereâs a lot of camaraderie between members,â Mike said. âItâs not really a car club â itâs a social gathering.â

The couple shrugs off the idea that Miatas resemble a Barbie car. They enjoy how sporty, fast and affordable Miatas are.

âIt just as much fun as a Corvette,â Mike said. âOur only rule is to have fun and enjoy life.â

Want to connect with other Miata owners? Search for Heart of Iowa Miata Owners Group on Facebook. Looking to purchase a new Miata? 2022 models start at about $27,650. ♦