Versatile 4-wheel drive crossover makes for an easy ride with room for people and all that stuff. 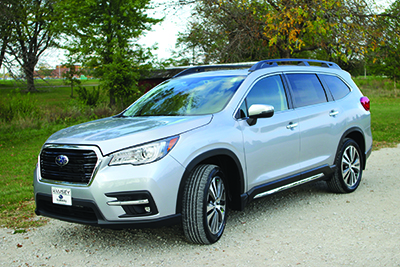 When you take a vehicle for a spin, you want a smooth ride with good handling. A day-to-day driver requires extra room in the vehicle for passengers and cargo, but itâs a different ride each day. Sometimes youâre transporting a lively gang of friends to tailgate at your favorite Iowa football game, while other times you might be venturing off for a family camping weekend, loaded down with tents, coolers and bikes all packed in the back.

The Subaru Ascent can handle it all. The 2021 Ascent is a versatile model, as it can hold seven passengers with an optional second-row captainâs chairs. The third-row bench seating, however snug with adult passengers, folds down easily with the pull of a strap, opening up space for more stuff. There is also under-the-floor storage, a bonus area. 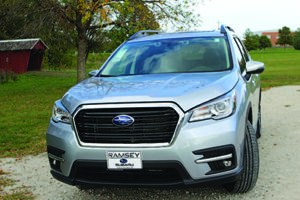 The Ascent appeals to buyers of other Subaru models â the Outback and the Forester âwho require more space. Itâs considered a crossover SUV. I never really knew what that term meant, so hereâs the explanation: A crossover SUV is built with a unibody frame construction. That means crossovers are based on a platform shared with a passenger car, as opposed to a pickup truck.

The benefit of a crossover means the ride is more comfortable, stable and easier to drive than a traditional SUV.

I discovered that firsthand. As I was driving along, my GPS suddenly told me to do a U-turn. As there wasnât much room to navigate between the median and the curb, I figured it would take a few shifts into drive and reverse before I could make the turn. It only took one turn, without putting the shifter in reverse. I was surprised at the ease of maneuverability. It felt just like my sedan, which turns on a dime. 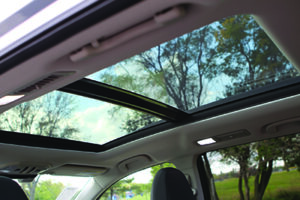 The Subaru is a smooth ride and boasts many safety features, such as lane-departure warning, rear-vision camera and auto emergency braking. While driving along, the car chimed several times. Did I cross the center lane? Was a car coming too close? I wasnât sure what it was trying to tell me, but it certainly kept me alert.

The dual panoramic rooftop mimicked driving in a convertible as rays of warm sunshine warmed me on a cool fall day. The second-row passengers experience that same open-air feeling, too.

The window sticker said there were 19 cup and bottle holders. I didnât count them, but thatâs an important number, because we all know how much other junk we put in those holders.

If you need a crossover thatâs an easy ride â with room for people and all that stuff â the Subaru Ascent is an ideal choice. ♦