Two-door hardtop is a cute, fun car that is easy to drive and quick to handle. 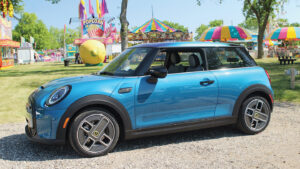 Nearly all car manufacturers are offering electric vehicles as alternatives to their gas-powered siblings. The MINI Cooper SE is one of the latest all-electric cars.

I test drove the 2022 hardtop two-door MINI Cooper SE electric from MINI of Des Moines. These are cute, fun cars. As the brochure points out, itâs similar to a go-cart driving experience. This test model was the smallest of their five different gas models.

Once inside, I barely adjusted the car seat as my short legs fit perfectly. A manual seat adjustment requires you to pump, pull and squeeze knobs to obtain the right comfort level.

The electric car started with ease and without engine noise. If youâre still sitting there, not going in reverse, hereâs a tip: Try unlocking the park button first. 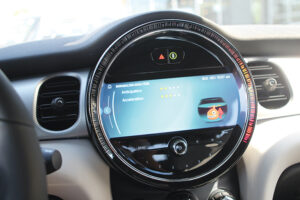 The ambient lighting is a cool feature, and you can choose from different colors encircling the 8.8-inch infotainment and dash lighting. A pink mode suited me as I slid open the panoramic moonroof.

A full battery charge holds 110 miles. I checked my gauge, and with 92 miles, it was go time. The vehicle shoots off quickly. Taking corners, it was easy to drive and quick to handle. Thereâs no bulky body, and the vehicle can whip easily in and out of traffic.

Thatâs how the company started â as a racing car. In 1959, the first MINI was born in Britain. After the war, developers designed a fuel-efficient and lower-cost car. In 1961, British racing legend John Cooper designed a more powerful racing engine, thus the MINI Cooper was introduced.

The car was made race-like with an engine that was installed sideways and wheels located at the corner of the car, allowing for better traction. The MINI Cooper officially made it to the U.S. in 2002. 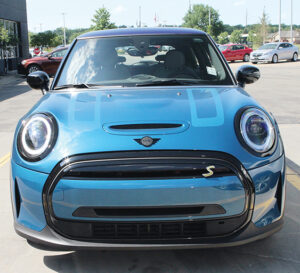 I traveled about six miles when I glanced at the battery life. It was already down to 61 miles. Why? Because it was a humid 92 degrees when I took off, and I cranked the air conditioner at full force. So, I switched it to Green Mode plus, which keeps things more efficient by shutting off the A/C and bringing in 92-degree air, thus allowing the battery life to remain stable. Interstate driving also meant I didnât brake as much, which powers the battery.

The backseat appeared tiny, but for important research, I thought Iâd check it out. Pushing the driverâs seat forward, I ducked my head, sucked in my middle-aged gut and practiced my yoga moves. I squeezed in the back seat, landing with a thud. Again, my short legs gave me ample seating, but anyone taller might find their knees in their chest. A four-door MINI might be a better choice for those with passengers.

The car appeals to minimalists and fun-seekers with MINI car clubs around the U.S. Owners deck out their cars with colorful decals and racing stripes. If you need a car to tool around town, and youâre somewhat petite, the 2-door electric will suit your needs. ♦