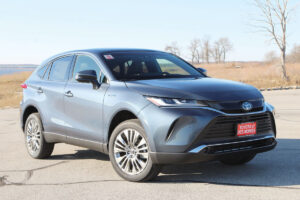 This monthâs car feature is the 2021 Toyota Venza. If you think the model name sounds familiar, youâre right. The previous Venza sold from 2009-2015.

For 2021, the Venza is a hybrid model, a mid-sized crossover SUV. A quick hybrid explanation means that the vehicle is powered by an internal combustion engine and an electric motor, which uses energy stored in the batteries. In a hybrid, the vehicle typically uses the battery first. Depending on how much power is needed, the gas portion then kicks in. The Venza has three electric motors with 219 horsepower.

A hybrid offers improved gas mileage compared to other SUVs and gets 37 miles per gallon on the highway; 40 in the city. Yes, you read the numbers right â hybrids tend to offer slightly better gas mileage in the city because lower speeds and increased braking mean more electricity and less gas are needed to power the car.

I took a test drive in the Limited all-wheel drive model at Toyota of Des Moines. When I initially used the push button start, I didnât hear the engine running. I kept pushing it and soon realized it was already running. The engine was so quiet, I didnât even hear it start up.

One sweet feature is the Star Gaze panoramic roof. With the push of a button, the full-size moon roof turns from transparent to opaque. This frosted-glass feature still lets light in without the glare. Although it doesnât open to let outside air in, it gives an open-air feeling for those claustrophobes who want the feel of a convertible without the wind messing their hair.

The ambient lighting around the doors creates a relaxed atmosphere, helping you locate buttons in the dark. Often, a car has numerous readout and navigation signs and information about which song is playing, etc. Itâs nice being informed, but for those who want less, they can adjust the knob to âcalm modeâ with just a basic readout.

The 12.3-inch touchscreen display is big, catering to those 45 and older who forgot their reading glasses. Safety features include road assistant, lane departure alert and cameras all around.

Nearly every new vehicle in the past few years includes technology updates, and the Venza is no exception. Depending on your phone, you can choose from Apple Car Play, Android or Alexa-enabled, which connects hands-free navigation. With USB ports in the front and back, everyone is happily connected with fully charged batteries.

Another nice feature is the digital rearview mirror, where you can zoom in to see whatâs behind you. It automatically reduces glare from headlights. On the mirror is an easy way to program your garage code door opener. Instead of searching for the ownerâs manual, which instructs you to press numerous buttons, these instructions are digitally displayed.

With a total of five seats, the Toyota Venza is not a carpool-type SUV. Itâs just right for young adults and baby boomers who want to fold down the backseats to store new gear â which youâll have plenty of since youâre saving money on gas.