Whatâs on the minds of local business leaders? 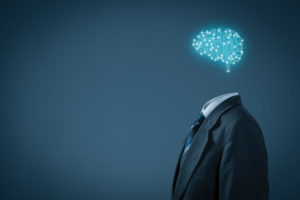 Business leaders hope the Iowa Legislature will take steps this session to pay for programs that will increase worker training, provide opportunities for worker housing and make the stateâs businesses more competitive nationally and internationally.

Some of these initiatives, initially, appear to have bipartisan support. As the 88th General Assembly opened on Jan. 14, leaders of the Democratic and Republican parties talked about investing in Iowaâs workforce, specifically through Future Ready Iowa; reducing property taxes, regulations and job licensing requirements; and making changes in the healthcare system.

The majority of this is good news to business representatives.

âNo matter what size (the business), we hear workforce or finding skilled workforce is a challenge no matter what,â says Nicole Crain, a lobbyist for the Iowa Association of Business and Industry (ABI), whose 330,000 members include a combination of the stateâs largest employees, many mid-size manufacturers and âmom and popâ shops.

The stateâs unemployment rate was 2.4 percent as of December 2018 with more than 55,000 job openings, according to Iowa Workforce Development. The rate is the lowest in the nation, Iowa Gov. Kim Reynolds announced Jan. 21. About 1,651,300 Iowans were employed as of December.

Not only is unemployment low, but the state also has the fourth highest labor participation rate in the country.

Workforce is the No. 1 issue on the 2019 Legislative agenda of the Partnership because it affects start-up companies, as well as the Fortune 500 companies located in the capital city, Murphy says. 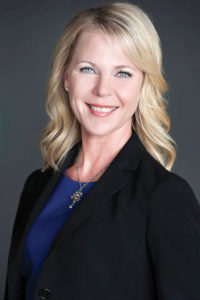 At the forefront of the business community is Future Ready Iowa Act, an initiative that Iowa Gov. Kim Reynolds introduced in 2017 that aims to give 70 percent of Iowaâs workforce education or training beyond high school by the year 2025 that would make an additional 127,700 Iowans job-ready with post-secondary degrees or credentials. Legislators passed the act during their 2018 session, and Reynolds has now asked them to spend $20 million to pay for it.

âAt its core, Future Ready Iowa recognizes that there is dignity in meaningful work, that Iowans yearn for the opportunity to better themselves, and that those opportunities exist right here in Iowa,â Reynolds said during her Condition of State Address in January.

Future Ready Iowa will direct resources to the places in the state where they are most needed by identifying high-demand jobs such as computer programmers and electricians, educating Iowans of those jobs, and providing individuals the skills needed for those careers, she said.

Murphy says the Partnership is cautiously optimistic Future Ready Iowa will receive the requested budget because the need to prepare the pipeline of Iowa workers for the jobs that are available today, and within the next 10 to 15 years with retirements and growth, is a nonpartisan issue.

Future Ready Iowa is one effort Crainâs group is monitoring closely within the appropriations committee to ensure it receives monetary support.

âAnytime you can make the business climate more competitive, that helps employees because we have low unemployment, and we have lots of opportunity for people,â Crain says. âI think thatâs a good thing. Everything Iâve seen has been pretty bipartisan and really focused on Iowans. I think thatâs the goal for everyone, whether you represent business or educators. We all want a better Iowa.â 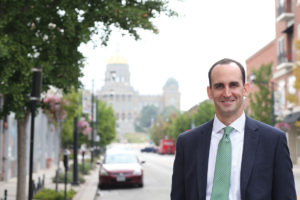 Worker education is an issue Iowa needs to address, both business and elected leaders agree upon. According to the Iowa Business Councilâs 2019 Iowaâs Competitive Dashboard, a look at how Iowa ranks against other states in the nation, the state ranks 38th in the nation for its percentage of the population with an education and training beyond high school.

âThese metrics indicate that the state is not keeping up with the talent demands of today nor properly preparing for the workforce needs of the future,â according to the report, which was released at the end of January.

Iowa Business Councilâs members employ more than 200,000 Iowans and are surveyed each quarter about barriers they face and their economic outlook. Members are positive about the economy, but their biggest barrier is to find the right talent, both for current staffing needs as well as the future, says Georgia Van Gundy, the executive director and board secretary.

Within the Future Ready Iowa Act are several components:

âIt really brings it down to whatâs going on there locally,â Van Gundy says.

About 30-some percent of the almost 100 people who work at General Mills in Carlisle are age-eligible for retirement, Plant Manager Kellan Longenecker says. The site experiences low turnover, in general, has only two vacancies and draws employees from as far away as Marshalltown, Newton, Knoxville and Osceola.

âRecruiting skilled operators that support a 24-hour operation remains one of our biggest challenges that we see in the future,â Longenecker says.

Workforce availability and the skills technicians need are two areas of challenge, she says. The company has spent time and resources to provide current employees with additional training to move into more advanced technician positions. There also are difficulties with filling nighttime shifts in order to keep the site operational 24 hours a day. When there arenât individuals with the proper skills available to fill in jobs, it leads to overtime and additional work for employees, Longenecker says.

âWe want to make sure we get great teammates hired for them â people who have the right technical skills, so the work is spread, and one person doesnât carry the load,â she says.

Longenecker says Future Ready Iowa will be key to many in the manufacturing industry, especially her peers who struggle more with filling positions. The initiative, along with Elevate Iowa, has promoted careers in advanced manufacturing and shown Iowaâs youth â and their parents and educators â the potential and pathways of advanced manufacturing careers, and it will give them additional education beyond high school that doesnât have to be four years of college. 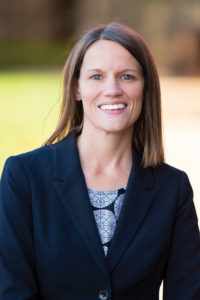 Nicole Crain is a lobbyist with
Iowa Association of Business
and Industry.

Another issue thatâs important to business owners is the Workforce Housing Tax Credit, which would help ensure there is affordable and adequate housing in communities across the state, Crain says.

As companies hire more workers, more housing is needed, and the tax credit would help communities with development or redevelopment of housing, she says.

Reynolds has requested $5 million for each of the next two years to increase the tax credit.

Affordable housing will become more of an issue in the future, Murphy says. The Des Moines metro area is expected to grow by almost 300,000 residents within the next generation.

âWe need to do things now to set the stage for workers,â he says.

Workforce housing shortages stifle business expansion and hinder efforts to attract new workers, according to the Iowa Business Council. Efforts to invest more money in housing are part of the holistic approach to economic growth, according to the councilâs Competitive Dashboard report.

IBCâs members and other businesses throughout Iowa report that housing even for internships is a challenge and will be more so in the future, as member businesses have pledged to offer 30,000 externships and internships by 2025 to get younger Iowans engaged in Iowa businesses, Van Gundy says.

While the housing issue affects rural Iowa more than urban, Van Gundy says all businesses, big and small, are affected. IBCâs member businesses have locations in all 99 counties.

âThey canât attract the population to those communities to fulfill those workforce needs,â she says.

Matt Everson, the state director of the National Federation of Independent Business, says Future Ready Iowa will help provide the skills, but it isnât a true silver bullet because Iowa still needs the people to do the jobs.

âRight now, 39 percent of small businesses report job openings they cannot fill because they canât find qualified applicants,â he says. âThere are more job openings than people looking for jobs even with an increase in wages offered. Employers canât seem to find applicants with needed skills, so we applaud the Governor for addressing this problem and hope lawmakers will realize its importance.â

Everson said a local trucking company is will to pay between $80,000 and $90,000 for drivers and struggles to fill the jobs.

âThese are good-paying jobs that are going unfilled,â he says. âThis is our biggest issue but also our toughest issue because there isnât a silver bullet.â

Van Gundy agrees population is part of the issue of how to address the worker shortage. IBC isnât pursuing any legislative initiatives related to it at this time, but the council will put together a group of individuals from the public and private sectors to collect data and brainstorm ways to attract individuals to the state and keep them here.

âWe need to have real conversations about what the state needs to do,â she says.

The positives of Iowa and Des Moines, including the low cost of living and little traffic, need to be highlighted, and there needs to be a bigger push to retain graduates from the stateâs colleges and universities, says Everson who himself came to Des Moines from Seattle and also lived in Washington, D.C. 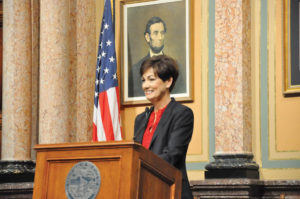 Iowa Gov. Kim Reynolds at the 2019 Condition of the State Address asked the Iowa Legislature to spend $20 million to pay for the Future Ready Iowa Act.

Murphy, with the Partnership, says the Legislature can continue to make central Iowa an attractive option to businesses and workers by investing in community development improvements, transportation and quality of life amenities.

Central Iowa needs to have the amenities and culture in place that make it and the entire state more attractive to individuals who come here for jobs or consider relocating for work, as well as out-of-state students who come to one of Iowaâs colleges or universities for their education, he says.

âWeâre doing everything we can to prop that up,â Murphy says. âWe know workers are coming here, but we need many more workers to come here.â

This includes monetary support through:

âThatâs such a critical piece of economic development, airports are, across the state,â he says.

âWe need to think about those things now and put plans of action in place so when 300,000 more people show up in the metro in the next 10 years, we have the infrastructure and the housing to deal with it,â Murphy says.

Tax concerns are a top issue among small business owners, Everson says. Most of NFIBâs Iowa member businesses make less than $100,000 a year and are a limited liability company or s corporations, pass-through entities, in which the income is reported on income taxes, thus affecting the individual.

Iowa has the fourth-highest tax rate in the nation when all taxes are combined, though lawmakers have made some changes in the tax system in recent years, Everson says.

âSmall businesses are still overburdened by taxes and regulations, so lifting that burden off their backs will also improve the state economic outlook,â he says.

Property taxes affect small business owners either through ownership or lease of their building, and the disparity is great from state to state. Everson cites one fast-food franchisee who owns buildings in both Iowa and Nebraska. Last year, he paid $45,000 in property taxes for the Iowa building and $14,000 for the Nebraska building. In the Siouxland area, businesses have moved across the border into South Dakota, Everson says, because the state does not collect income tax.

The rollback the Iowa Legislature approved in 2013 helped, but with reassessments and city officialâs raising their budgets, that savings has been gobbled, he says.

Small business owners, who also own their houses and pay property taxes, face additional thousands of dollars in tax bills. Everson says he thinks the Legislature will take action on property taxes this session.

Other issues to watch

The Carlisle site competes with other food manufacturers in the area, so Longenecker says the site must stay competitive to attract top talent. Any initiatives, such as examinations of fees and taxes, that the Legislature can make to Iowaâs businesses competitive, is a win for all. ♦