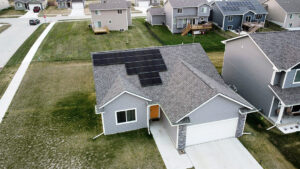 More central Iowans are making the switch to solar, and itâs not just because of the tax incentives. On one hand, solar energy is seen as an alternative to typical means of electricity production: natural gas, coal and nuclear energy. On the other, solar panels are an investment and a way to take ownership of oneâs power. However, more than just cloudy skies stand in the way of solar energy taking over. Homeowners, business owners and farmers alike can benefit greatly from solar panels, but it all comes down to having enough capital.

Ben and Lety Wuertzer moved into their new Waukee home in October 2020. Much like how they owned their house and cars, the Wuertzers wanted to own their electricity, too. Ben first inquired about solar panels last February. While doing online research, he stumbled upon an online questionnaire for those interested in residential solar. 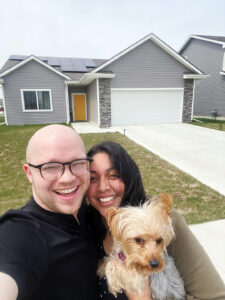 Ben and Lety Wuertzer save $20 to $40 a month with their solar array in Waukee. Photo submitted

He found comfort in answering a call from a local 515 number. After speaking with a representative from Purelight Power, he set up a time for them to come out, look at the house and discuss solar options for the couple.

The installation process took four months to complete. After the city and utility company completed their inspections in May 2022, the couple turned on the switch and began producing their own power. Since installing their solar array, the Wuertzers have drastically reduced their electric bills.

When Wuertzerâs panels produce power, it is consumed live by his own home first. On especially sunny days, the excess power the panels produce is back-fed into MidAmerican Energyâs grid so that Wuertzerâs neighbors can use it. Each month, MidAmerican tracks the number of kilowatt-hours (kWh) Wuertzer puts into the grid. In a process called net metering, MidAmerican exchanges 1 kWh to 1 kWh at full retail price. During not-so-sunny days or shorter winter days, the Wuertzers can use those credits built up over the course of the year.

The total cost for the solar array and installation was $19,000. However, after a 30% federal tax credit made possible by the Inflation Reduction Act, the cost was lowered to $14,000. The Wuertzers decided to finance through Sunlight Financial, which works with Purelight Power to finance their solar installs.

âOur first solar payment wasnât due until after the install, and there was no money down needed to get the project started and installed,â Ben explained. Most months, Wuertzer is only paying MidAmericanâs connection fee of $8.50, which is required by each resident to stay on the grid. His monthly bill is $8.59 after tax.

Wuertzer said he is excited to be investing in something he will own. He expects the panels to pay for themselves in about eight years.

âItâs just like owning your house, your car; thereâs an actual completion date,â he said. âStop renting your power and start owning it.â

John Forbes is the owner of Urbandaleâs Medicap Pharmacy. He was also elected to the Iowa House in 2012. 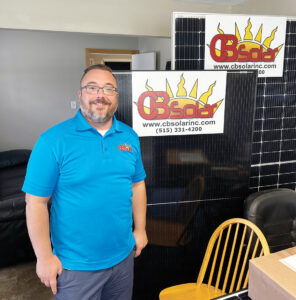 âYou learn a lot of things when youâre a legislator,â Forbes explained. During his time in the House, one of the things he learned about was solar energy.

Forbes wanted to do his part and reduce his carbon footprint. When he built the pharmacy facility in 2014, he did not have the capital up front to include solar in the construction. He told the engineers to plan for a solar installation down the road. One of Forbesâ colleagues in the House, Tyler Olson, encouraged him to use his Cedar Rapids-based company, Paulson Electric Co. By 2015, Forbes had enough funds to purchase his own solar array. In two weeks, Paulson Electric installed 90 total panels, weighing about 12,000 pounds.

The total cost for Forbesâ solar array, on top of the Medicap Pharmacy, was about $90,000. However, he took advantage of the federal tax credit and, at the time, the stateâs tax credit. He ended up paying a net of about $50,000.

Forbes expects his payback to be within seven to eight years of the install. Without the federal tax credit, it would have been pushed to about 12 years.

For commercial businesses, the payback for solar panels comes more quickly than residential arrays. This is due to the unique depreciation rules regarding commercial solar. At todayâs 30% federal tax credit rate for solar, a $100 array would normally be a $70 deduction and a $30 credit. But with solar, the depreciation basis for solar is reduced by one-half of the allotted tax credit. So, it would be an $85 deduction and a $30 credit. Essentially, there is double dipping in the dollars being deducted and the dollars being credited.

âPeople thought they were going to get it, and they didnât receive the credit,â Forbes said.

On Jun. 17, 2022, Gov. Reynolds signed a modification to the Iowa Solar Energy Tax Credit. It appropriated $5 million more to credit those who missed out in 2021. The credit is not extended into the future for individuals installing solar, but businesses are still eligible.

Throughout the year, Forbes produces about 100 to 110 kWh per day. For comparison, the Wuertzer household produced 481 kWh between July and August this year. Forbes saves between $600 to $800 per month: $7,200 a year. However, he does run out of credits before January. Between January and March, Forbes pays MidAmerican Energy full price for electricity.

Forbes produces about 85% of his power with his array. He said he strives for 85% because MidAmerican never writes any customer a check. If a solar customer produces more than 100% of their energy consumption, they just end up giving the grid free energy.

As both a solar user and legislator, Forbes recognizes the challenges that solar in Iowa still faces.

âThe reason why people have a hard time installing solar is No. 1, banks donât like to lend money on solar; they just donât see it as a safe investment. No. 2, you have to have the capital up front to be able to do the install.â

As a legislator, Forbes said he wants solutions to make solar installation easier and hopes the state will look at loan incentive programs where the state would offer low-interest loans. Another issue is that those who install solar might have to wait up to a year to be credited for their installation.

CB Solar in Des Moines specializes in residential, commercial and agricultural solar installation across the entire state. The company is just a small operation of a few âIowa boys.â Matt Edwards has a background in corporate tax and considers himself the ânumbers guyâ at CB Solar.

For CB consumers interested in solar, the process begins with a rough estimate.

âWe donât need a lot to give you a rough quote,â Edwards said. âA little more than your address could get the ball rolling.â

CB Solar asks for an address, a previous utility bill and satellite imagery to map an array. If the quote looks good to the consumer, a representative from CB Solar will come out to the site to do an in-person quote and make the unknowns known. All quotes from CB Solar are at no cost to the customer.

When CB Solar first began business, most of their clientele were farmers who had the capital to invest in solar panels. Today, two-thirds of their business comes from residential solar. Edwards said he thinks a general adoption of solar has supported their business; however, there is still a lot of opportunity on each residential street in the metro.

For some homes, CB Solar could come out in one afternoon to install and flip on the switch the next morning. But, most of the time, there are a lot of safety and municipal regulations along the way.

âSome peopleâs houses are ready for solar right now with nothing more than the solar itself; others, they need a considerable amount of electrical upgrades,â Edwards explained. âMany jurisdictions are involved because you have city rules, county rules, utility rules, and youâre just putting a lot of pieces together. And youâre dealing with Iowa elements.â

Edwards compared solar in Iowa to solar in the city of Chicago. While Chicago has about two or three utility companies and one jurisdiction, Iowa has 99 counties and about 200 utilities in the state.

Edwards recognized the issue of having enough capital, reasoning: âThe average homeowner, youâre asking them to buy a car and park it on their roof.â

CB Solar also uses Sunlight Financial to provide consumer financing. Sunlight has loans with 25- or 30-year amortizations to match the warranted lifespan of most solar panels. Edwards explained that the monthly loan installments are essentially a bill swap with the monthly electricity bill avoided by solar. ♦