The business of CBD and THC

Lacie Navinâs father struggled with fibromyalgia for years. Pain and sleep medications continued to pile on top of each other until a family friend introduced them to cannabidiol (CBD). Her father tried a topical pain cream and a tincture.

âIn four monthsâ time, he ended up weaning off of everything he was on,â Navin explained.

What seemed to be a medical miracle became Navinâs next business venture. Navin now owns Your CBD Stores in Valley Junction and Ankeny and co-owns the Waukee and Ames locations with her father.

It hasnât been easy. Along with the rest of the CBD businesses in Iowa, Navin continues to navigate the challenges of the relatively new industry within the state. 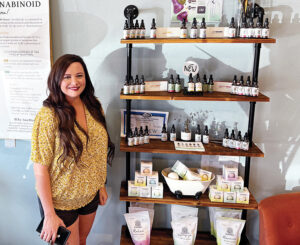 In early 2019, Navin and her father opened the first CBD store in the metro. Your CBD Store is a franchise that only sells one brand: SUNMED. In the beginning, few customers would come to the store because only a limited number knew anything about CBD. After some news stories ran, business began picking up.

By the end of 2019, Navin had three stores open in the metro. However, in December that year, she was arrested for what she explained were âmarijuana trafficking charges.â Stores remained closed for 18 months before the charges were dropped.

âThere are a lot of other places that sold CBD and opened up while my stores were shut down,â Navin said. âBeing the first and biggest at the time, I think I drew the short straw.â Due to the arrest, Navin considers herself, and her business, an outlier. 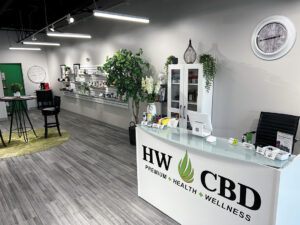 HW CBD owner Rick Wagaman prides himself on his large selection of CBD products in a clean and professional environment. Photo by Colson Thayer

With a background in marketing, Rick Wagaman owns HW CBD in West Des Moines. HW CBD is not a franchise and is instead locally owned and operated. Wagaman prides himself on the storeâs large selection of premium products within a clean and professional environment.

One of Wagamanâs main goals is educating his customers. Whenever a new customer enters his store, he begins by explaining the endocannabinoid system and how it relates to the body. He likes to keep the science simple for his customers and tells his employees to explain it in a way a sixth grader could understand. So, when a WWE wrestler or an amateur soccer player comes into his store â like they have in the past â Wagaman begins with the basics. He also commits to speaking engagements where he can educate large groups of people, like a group of senior citizens. 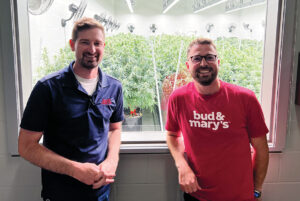 Bud & Maryâs Kevin OâConnor, Iowa President (left) and Julian State, head of marketing (right). Located on Des Moinesâ east side, the company is the only producer of medical cannabis in the state. Photo by Colson Thayer

Bud & Maryâs holds one of two medical cannabis manufacturing licenses in the state and two of five dispensary licenses. The company has been one of the biggest proponents of medical cannabis in Iowa before the program started in December 2018. Locally owned, operated and based in Iowa, Bud & Maryâs also participates in the Colorado and Michigan cannabis markets â states that permit both medical and recreational cannabis.

âItâs really difficult to operate here. Regulations are really difficult,â said Julian State, head of marketing for Bud & Maryâs. For four years, Bud & Maryâs operated at a loss. However, once the company started making a profit, they claimed to have dropped their prices 25-30%. As the only medical cannabis manufacturer in the state, the extra challenges the company faces include testing restrictions, having only one location to do hygienic labs and having to spend millions of dollars to keep their facility compliant.

Bud & Maryâs is the recent rebranding of MedPharm Iowa.

Most consumers are somewhat familiar with the cannabis sativa plant. The plant goes by many names: cannabis, marijuana, pot, weed, etc. Cultivated from this plant are hundreds of chemical compounds. Among those are Cannabidiol (CBD) and Tetrahydrocannabinol (THC). Both hemp and marijuana are from the same cannabis species. Generally, hemp is the cannabis plant that has 0.3% or less THC content, while marijuana has 0.3% or more THC content.

Products made from hemp can further be divided into three categories. Full spectrum uses the entire plant and will contain traces of THC, broad spectrum uses all cannabinoids and compounds besides THC, and CBD isolate only uses the CBD compound.

Every human being has an Endocannabinoid System (ECS), even if an individual doesnât use cannabis. The ECS has a role in the bodyâs everyday functioning like sleep, mood, appetite, memory, reproduction, etc. The ECS is critical in returning the body to homeostasis.

A growing number of American consumers utilize both CBD and THC to find relief. The biggest difference is the âhigh.â THC has psychoactive properties that alter perception, and consumers who prefer avoiding these effects typically opt for CBD. Research suggests no negative consequences related to CBD.

Iowaâs medical cannabis program went live on Dec. 1, 2018. In the early days, patients needed to apply for a card, receive physician approval, go to the DOT to get a physical card, and pay $100 annually for that card. The list of acceptable conditions was also limited, including terms like âuntreatable pain.â Previously, there had also been a 3% THC cap on all medical cannabis products.

Since then, the program has made strides to be more accessible and inclusive for patients needing care. Today, Iowans can fill out an application online and schedule a meeting with a telehealth professional. Iowans no longer need a physical card and can instead rely on a digital one, removing the need to go to the DOT. State, from Bud & Maryâs, said someone could do this within an hour.

The program also now includes PTSD and âchronicâ pain in the list of conditions. Additionally, in 2020, the state removed the 3% cap on THC in medical products and allowed for up to 0.3% in hemp products. The change in hemp law is what allows for CBD businesses to be open and sell to consumers without medical cards.

Hefty regulation still exists in both of Iowaâs CBD and medical cannabis markets. CBD stores are not allowed to sell inhalables or pet products. Medical cannabis cannot be smoked in any form, meaning they canât sell flower, or products that can be rolled in a joint.

Navin said a lot of customers come in the doors hoping that CBD can aid one specific type of ailment, but thatâs not exactly how it works.

âThereâs just certain things that it takes someone with a bit of education or knowledge to send them at least on the right path to start,â she said.

CBD can help consumers with a variety of different issues. According to Wagaman, âSeventy percent of our customers are here for stress, sleep, anxiety, general wellness [and] appetite control.â

One of the biggest differences between CBD products is delivery method. These can include tablets, tinctures, edibles, creams, solubles and more.

THC can also be delivered in a variety of ways: vapes, tinctures, creams, topicals, etc. Bud & Maryâs also sells products labeled as edibles on their website; however, Iowa law forbids the manufacturing of âedible medical cannabidiol products.â The company considers them as tablets taken orally.

Cannabis is still illegal federally. Because cannabis is a Schedule I drug, the Food and Drug Administration (FDA) is not allowed to test or approve cannabis products â both medical and recreational. Therefore, most of the results and evidence surrounding CBD and THC are anecdotal.

FDA regulations prevent CBD and THC vendors from making certain promises to their consumers. Although he never promises anything to his customers, Wagaman thinks that anecdotal evidence is worth listening to.

Each consumerâs experience with CBD will be different. Because the research is so limited, consumers have no idea how to start in terms of dosage or frequency. CBD and THC business owners, like the ones in the metro, will provide resources like informational handouts along with dosage and hydration journals to keep track of progress. If something doesnât work for a consumer, the business owners offer to find the right fit â whether it be a new delivery method or different dosage.

Online marketing is a challenge for both CBD and THC businesses. Oftentimes, big sites like Facebook and Google avoid taking money from cannabis-related businesses while it is still federally illegal. The platforms even go as far as taking down certain accounts. For example, Bud & Maryâs lost access to their Instagram account. HW CBD was formerly able to send texts to its customer base through its point-of-sale system, Square, but is no longer allowed to.

The cannabis industry in Iowa relies on word-of-mouth, referrals and traditional forms of marketing. Most of the time, cannabis consumers hear something from a friend, or read something online that brings them to a store. It goes back to the anecdotal evidence the industry relies on. Beyond that, businesses have bought print ads, billboards, radio spots, sponsorships, written advertorials and more to draw attention.

Those in Iowaâs cannabis industry are hopeful for the future. Whether the legality and use of cannabis broadens in the state or not, the biggest hurdle will remain education. Without educated customers, and educated Iowans in general, CBD and THC will continue to be obscured. ♦