The business side of farmers markets 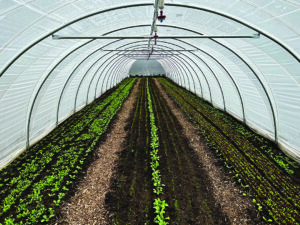 Caterpillar tunnel at Grade A Gardens, a certified organic vegetable farm in Earlham.

The Des Moines Downtown Farmersâ Market launched in 1976 with 15 vendors. Since then, it has become a downtown mainstay and has grown to 280 vendors covering several blocks. The Greater Des Moines Partnership organizes the Market, which runs from 7 a.m. to noon every Saturday from May 7 to Oct. 29 (8 a.m. to noon in October).

Farmers, producers, bakers, artists, crafters, performers and many other small businesses converge on the Court Avenue area to represent Iowa products from 50 Iowa counties. For the vendors at the Market, itâs a lucrative gig â and one that generally lasts as long as they want. For those hoping to be a vendor, getting a foot in the door proves to be difficult â and frustrating.

The process to participate in the Market begins in January. Jerrica Marshall, the downtown place making manager at the Greater Des Moines Partnership, explained the online application for new and returning vendors is open for 30 days in January. From there, the applications move on to what is called a âvendor jury.â In years past, the jury included representatives from the Partnership, the Marketâs sponsors and veteran vendors. However, due to the COVID-19 pandemic and the departure of the longtime director of Downtown Farmersâ Market, Kelly Foss, the jury has only included the Partnership and its sponsors. 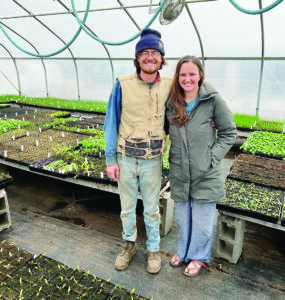 Applicants are judged according to the Marketâs guidelines assessing a vendorâs products. They emphasize âhandcrafted, handmade items,â Marshall explained. They also like to approve a variety of vendors and avoid duplicating the same type of products. From there, they inform the vendors through email whether they have been approved.

Approved vendors are either full-season or occasional vendors. Those who are occasional are offered select Saturdays throughout the season. To those who are not approved, Marshall said, âWe give them the opportunity to ask us questions if they want recommendations on what was missing.â

The process is easier for veteran vendors. According to Marshall, nearly all are approved. They are reviewed on a case-by-case basis; however, they would only be denied if they have a dramatic shift in product offerings.

âAs long as they have been a veteran and want to return, we will let them,â Marshall said.

Marshall explained this is because they want shoppers to see their favorite vendors where they are normally located.

For the 2022 Market, about 280 out of about 350 applicants were approved. Forty of those are new to Des Moines Farmers Market.

âWe try to approve as many vendors as we can. If we have space, we want to try to fill them,â Marshall said. 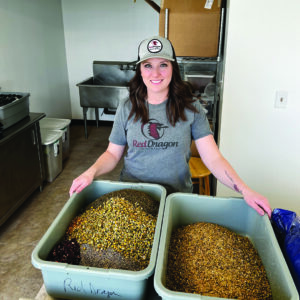 Sara Todd with The Holton Homestead, a honey business based out of Elkhart, applied for both the 2021 and 2022 markets but was not accepted. She called the Market âchaotic,â but recognized the value of participation for a business.

During her experience with the Market, Todd said she found it difficult to communicate with Market officials. She said she was put on a waiting list, but nothing ever came from it.

Jordan Clasen, owner of Grade A Gardens in Earlham, who has been in the Market since 2009, agreed: Those who make it in are grandfathered in for life.

Addressing concerns of favoritism, Marshall said, âWe would like to think that there is no favoritism in the way we choose our market vendors.â She added, âThe opportunity is there; itâs just competitive.â

âI want people to appreciate and understand how much work goes into it,â said Jenny Quiner, the owner of DogPatch Urban Gardens in Des Moines.
Quiner and her team arrive at their farm at 4:30 a.m. in order to be at the Market by 5:30 a.m.

âItâs a long day,â she said.

Each vendor must follow a set of rules established by the Market; otherwise, they will be asked to leave. Each vendor is allocated a 10-foot by 10-foot stall. The vendors are not allowed to sell products until the opening bell at 7 a.m., and they must stay until noon when the market closes. This is to maintain orderly foot traffic for attendees and vendors. They pay anywhere from $660 to $1,269 for a single stall.

Mary Lewellin, the owner of Red Dragon Herbs and Teas, thinks the rules allow for the Market to run smoothly and set the vendors up for success. She receives about 50% of her business at the market.

âThe market is all about connecting and knowing the customer,â said Quiner, adding that the Market is a unique opportunity to get to know the people buying her product. Quiner, along with many other vendors, see a mixture of both new and returning customers. Foot traffic is essential to business.

âI might be able to sell them a bunch of carrots,â said Clasen about passersby who might not have come to the Market to buy produce. Typically, those who are coming for produce and their weekâs groceries come early in the morning to buy the best products and beat the crowd
âA lot of our customers donât like all the dogs and the strollers and the 50,000 people. They just want to buy food and get out,â Clasen said.

One of the keys to success for vendors is a visually appealing stand.

âItâs got to look good,â emphasized Clasen. His business, Grade A Gardens, can make sales anywhere from $2,000 to $5,000 on a Saturday at the market, which equates to about 30% of his business. Shoppers buy with their eyes, so extreme effort is put into creating a beautiful arrangement of products.

âIâm not pissed at people that want to resell produce,â Clasen said. However, he and some other vendors want to make sure shoppers know what they are buying.

Despite the fact that she has never been in the Des Moines Farmersâ Market, Todd and The Holton Homestead have had seven successful years of business without it. Her business participates in many other farmers markets including Valley Junction, Ankeny, Altoona and Maxwell. She finds these markets more accommodating to vendors and less anxiety-inducing.

Lewellin plans to participate in her hometown market in Polk City. Many other vendors across the state also take advantage of smaller markets.

Clasen finds it is not worth it for Grade A Gardens to participate in other markets. He cited loading up an entire truck with produce just to make a couple hundred dollars. Most of the produce that vendors do not sell end up in compost because it either wilts or goes bad.

When the market was closed due to COVID-19, Clasen and Grade A Gardens developed a temporary solution to offset the revenue lost by small vendors. He organized an impromptu market at the Des Moines Community Playhouse and invited many of his vendor friends to participate. Lewelling and Red Dragon Herbs & Teas was one of the participants. Clasen focused on bringing a variety of vendors to this market.

Many of his regular customers wanted him to continue this market even after the Downtown Market opened back up. However, he was worried that long-term, it would not pan out with the Playhouse.

Red Dragon Herbs & Teas teamed up with The Holton Homestead for their own Motherâs Day Boxes. Todd saw Lewellinâs products in a variety of places, and they met through networking and market gatherings. They figured honey and tea go well together and created a box that shipped to customers.

âItâs collaborative rather than competitive,â Quiner described the Market. The relationships between vendors at the Market is used as an advantage rather than a threat. Vendors will go around the Market and visit with friends and try their products.

âWe all support each other, so weâre all buying each otherâs products,â Lewellin said. âFor me, when I get there, I canât wait to see my vendor friends.â

While farmers markets are a growing-season staple in many communities, farmers are a declining percent of the vendors participating.

Today, many vendors are not farmers. The Market even promotes more than just produce in their press releases. T-shirt companies, artists, crafters and more line the street alongside the farmers.

âI feel like thereâs space for all of us,â Lewellin suggested. She is not a typical farmer but thinks that the Market should include a variety of products. ♦