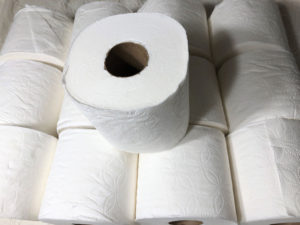 Greg Stoll learned in January from several sources, as well as his own research, that a new virus was about to break out in China.

Stoll, who taught international strategic planning for the U.S. Army, regularly reads news from New Zealand and Australia because he believes it to be more nonpartisan. Thatâs where he first learned of COVID-19. Stoll used his understanding of logistics during his time in the military, as well as his background as a business teacher, to consider what items would be in high demand should COVID-19 reach the U.S.

âI looked at all of the things we would probably run out of, and I went out and spent $1,000,â says Stoll, who also has a connection at the Centers for Disease Control and Prevention.

Stoll bought cases of toilet paper, facial tissues, hand sanitizer, disinfectant wipes â all of the âthings that if people were at home and instead of work, what we would run out of.â

Stoll used some of the supplies during Iowaâs stay-at-home order from Gov. Kim Reynolds, but much of it he gave away to family, his church, a friend who operates a daycare, another friend who works at a nursing home, and others. 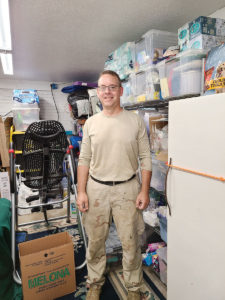 Greg Stoll of Norwalk shows his storage areas where he stocks up paper products such as tissues and toilet paper, as well as coffee and hand sanitizer.

Currently, the Stolls are back to ânormalâ for the amount of supplies they have on hand, which is usually about a case and a half of toilet paper.

When meat plants started to close down, the Stolls bought a quarter beef from a local farmer and had it processed.

Stoll says he bought all of the items during two shopping trips. People looked at his cart and commented: âLooks like youâre stocking up.â

He replied that he was and warned them that they would run out if they didnât.

Stoll frequently shops in bulk. He grew up in rural Montana, and his parents had a couple of freezers full of meat and a pantry stocked with canned goods. The Stolls already had stocked shelves with food when the COVID-19 buying frenzy hit the Des Moines area, but Stoll bought a few extra bottles of vanilla. He knew that Madagascar produces 80 percent of the worldâs vanilla, and it could become in demand. He also bought 10 four-pound bags of coffee.

âWe bought a little too much coffee,â he jokes.

Stoll says he also read that, because of farm worker shortages and workers getting sick, canned vegetables will be in short supply through the next year. As a result, Stoll has prepared a garden in which he has planted tomatoes, peppers, zucchini and other items he and his wife plan to preserve and store.

Stoll also offered to till a garden for anyone at his church and for his friends.

Andrew Clark of Des Moines started stocking up on toilet paper, canned foods, nonperishable items and cleaning products (wipes and aerosol spray) in early March. Instead of facemasks, he bought a paint respirator.

âAll of my friends thought I was crazy until it blew up into a pandemic, and they couldnât buy toilet paper or anything else,â he says.

In total, Clark estimates he had 300 rolls of toilet paper and a couple hundred dollars of canned foods and other nonperishable food items such as crackers and chips.

âIt was things I didnât have to refrigerate in case the craziest of the crazy happens and we lose power,â he says.

In addition, he has several containers of disinfectant wipes and aerosol disinfectant spray left so he can continue to sanitize his house and vehicles.

âIf I absolutely had to go out, even though I wore a mask, I still sprayed my truck down and wiped it down,â he says.

Clark took one day in March to do all of his shopping.

âI was getting funny looks because I had the shopping cart packed full to no tomorrow,â he says. âI like to be prepared. Iâd rather have overkill than underestimate things.â

Clarkâs only departure from his house was to go to the grocery store â other than a few visits with friends. Heâs self-employed and works from home and is focused on home renovations.

He says a few people have asked to buy items off of him, but he hasnât re-sold anything he purchased.

The nonprofit Public Library of Science recently published an article written in mid-April that included the results of a survey of more than 1,000 adults from 35 countries that asked them about their buying habits. Those who scored high in emotionality and tended to be more fearful or anxious about COVID-19, as well as those who were high in conscientiousness and were organized, diligent and perfectionists, were more likely to stockpile items.

Fareway Stores, which operates 122 grocery store locations in Iowa, Illinois, Minnesota, Nebraska and South Dakota, started to experience limited availability in mid-March in hygiene/sanitation items, eggs, milk and bread because of an increase in demand from shoppers, says Emily Toribio, spokeswoman for the company.

âDuring the month of May, we prepared for potential meat supply issues and were in constant communication with our great vendor partners,â she says. âOur supply remains steady, and we have not seen dramatic shortages.â

Nationally, grocery sales were up almost 27 percent from February to March, according to information from the Iowa Grocery Industry Association, a state trade association that represents the food industry from supermarkets and convenience stores to suppliers and wholesalers. Sales also were up for household care items, meat and frozen food.

According to an article on the IGIA website, many U.S. consumers stocked their pantries starting at the end of February. Sales kicked up the first week of March for oat milk, dried beans, tuna and dried milk.

Nationally, many grocers implemented per-customer limits on the purchase of meat, both to protect the supply and to prevent customers from buying in bulk, according to the IGIAâs website.

The limits were put in place after at least 20 meatpacking plants in the United States closed during a two-month period, which reduced pork
production by one-fourth and cut beef output by almost 10 percent. As a result, many grocers limited meat purchases to two items per type of meat.

Hy-Vee, a chain of more than 245 supermarkets located throughout the Midwest, announced in a May 6 press release that each customer would be limited to four packages of a combination of fresh beef, ground beef, pork and chicken.

With reopening of state, country, some items become available 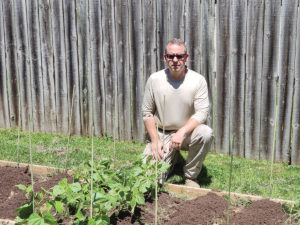 Greg Stoll planted a large garden to grow food for preservation, as he is concerned about a predicted shortage in vegetables for the next year because of workers being sick from COVID.

By the end of April, some pandemic buying had declined even though many Iowans and Americans were still in self-quarantine.

A Consumer Brands Association survey found that, while concern about finding items such as household cleaning products remained high, 59 percent of customers noticed greater availability of some high-demand products such as toilet paper.

The shortage in supply affected all Fareway stores regardless of size of the community, even though stores receive shipments daily. Shelf-stable products, hygiene/sanitation items and meat/seasonal items with the arrival of grilling season, as all still in high demand, Toribio says.

Fareway storesâ supply for items remains mostly steady, though it reserves the right to limit quantities if needed, she says.

To help meet demand, Georgia Pacific, the company that makes Quilted Northern, worked to expedite product from its existing inventory,
increased product to a 24-hours-a-day seven-days-a-week operation and changed its distribution process to help meet customer demands,
according to the companyâs website.

The company did not increase its suggested retail price for products and reached out to third-party sellers that appeared to be price gouging to have them remove Georgia Pacificâs products, the company reported.

Meanwhile, Greg Stoll and Andrew Clark arenât taking any chances and are keeping their supplies strong.

âI didnât know how long the stuff (COVID-19) was going to go on, and from the talks of it, itâs going to come back anyway,â Clark says. ♦