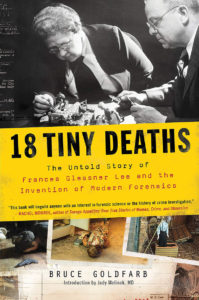 â18 Tiny Deaths: The Untold Story of Frances Glessner Lee and the Invention of Modern Forensicsâ

For fans of crime scene investigation television shows and those desiring to read inspirational stories of womenâs contributions to our world, this is a must read. Frances Glessner Lee was born in 1878 into great wealth. Educated at home, she never attended college, but in her 50s she became reacquainted with George Magrath, a medical examiner, and together they created scientifically based methods of crime investigation.

Lee devoted much of her time and wealth to the creation and operation of Harvardâs Department of Legal Medicine, the precursor to Forensic Medicine. She purchased many of the documents that created the Magrath Library of Legal Medicine and was instrumental in the development of the curriculum of the department.

She developed and funded training seminars attended by law enforcement and medical personnel. For use in the seminars, Mrs. Lee created the Nutshell Studies of Unexplained Death, more than 18 dioramas of death scenes which were used to sharpen the observation skills of the attendees. Extremely detailed at a 1:12 ratio, they exist to this day. This is a compelling biography of an amazing woman. ♦
â Review by Harriet Leitch 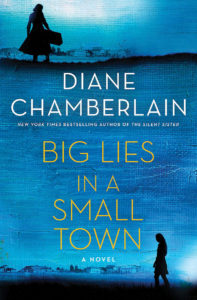 Whether youâre looking for a spring break read or a last snow day of the season escape, give this story a try.

âBig Lies in a Small Townâ intertwines the lives of two women in the coastal town of Edenton, North Carolina. In 2018, Morgan Christopher is mysteriously offered an early release from a three-year stint in a womenâs correctional center. She had been an unexceptional art student prior to her sentencing, but for some reason was handpicked to restore a mural created by a relatively unknown painter nearly 80 years
earlier. As she meticulously cleans the original painting, she uncovers disturbing images that lead her to believe something, or someone, in this small town guided the artist down a path of violence and madness.

As part of a government program in 1940, Anna Dale was the artist chosen to paint the post office mural. Although she was from New Jersey, she was assigned to travel to North Carolina to complete the work. While many of the residents welcomed her, she soon realized
that in Edenton, prejudices ran deep and small towns liked to keep their secrets. ♦
â Review by Shirley Shiffler