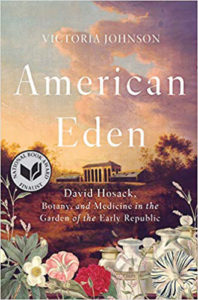 âAmerican Eden: David Hosack, Botany, and Medicine in the Garden of the Early Republicâ

Dr. David Hosack was a doctor and botanist who lived among and treated some of the Founding Fathers. In the later part of the 18th century, he traveled to England to add to his medical knowledge. There he studied with noted botanists of the day to gain more knowledge of the medicinal properties of flora. He brought back a passion for botany that greatly impacted the young nation. He used his own money to buy a tract of land in Manhattan and developed a botanical garden, Elgin Botanic Garden, the first of its kind in the country. The life and death of this âEdenâ makes for fascinating reading. The site of Elgin is now where the Rockefeller Center stands.

Dr. Hosack was present at the duel of Hamilton and Burr, both of whom were his patients. He and his wives were also instrumental in the development of the cultural and philanthropic life of New York. Ms. Johnson rescues his name and the memory of his gifts to the nation in this work. ♦ 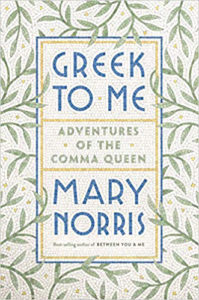 Mary Norrisâ first book, âBetween You Me,â is an engaging combination of memoir and grammar guide. In her new book, âGreek To Me,â she offers a glimpse of more life-shaping memories as she describes her fascination with all things Greek and her immersion in Greek language, culture and travel.

As she did with grammar, pencils and punctuation in her earlier book, Norris delivers a remarkable amount of information about the origins of the alphabet, the influence of the Greek language on English, the transition from ancient to modern Greek (she studies both) and the gods of Greek mythology. While Norris describes her travels in Greece with such an appealing, self-deprecating sense of humor that you might wish you could go with her, she makes a strong case for the benefits of traveling alone.

A passing familiarity with Greek mythology would undoubtedly add to the appreciation of this entertaining book. Readers without it can enjoy what seem like stories told by your funniest friend and may be inspired to pick up the works of Edith Hamilton, which Norris highly recommends. ♦