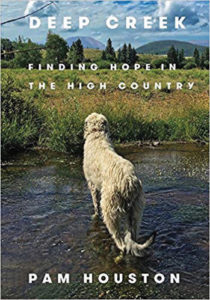 Pam Houston’s affecting new title consists of essays depicting scenes of life at her ranch home. In 1993, with funds from the success of her first book, âCowboys Are My Weakness,â Houston purchased a 120-acre ranch near Creede, Colorado. Twenty-five years later, all mortgage payments coming from money she earned herself by working, Houston finishes this book from her 100-year-old cabin on that ranch, “an effort to write (her) way to an understanding of how to be alive.”

Surviving a horrific abusive childhood at the hands of her parents and a youth spent “addicted to danger” with suicidal thoughts and forays into reckless endeavors, Houston moves from a childhood feeling “unsafe, unwanted, and unsettled” to establish a “real” home, a safe place of refuge “as beautiful a thing as (she has) ever known.â The ranch and its environs and inhabitants mother her perfectly.

Spending most of her life outside, Houston embraces the outdoors and takes “the greatest comfort in being surrounded by wild things.” “Motion improves any day for me,” she writes, as she hikes, rafts, stacks wood and moves hay. She expertly relays “what makes her heart leap,” from her wolfhounds to summer monsoons to wildflowers to elk. She straightforwardly tells her story, from abuse and heartache to intense snow and unprecedented wildfire to the kindnesses of others who’ve changed her life forever. Between teaching and traveling, Houston is frequently gone from the ranch for weeks at a time, but she is happiest coming home to the wild arena of solace awaiting her, where she can pay “strict attention” as she observes the land, animals and weather outside her kitchen window, the “beauty worth seeing, worth singing, worth saving.” ♦ 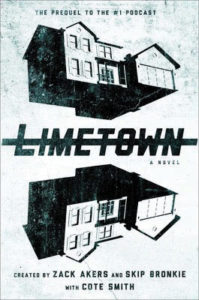 Fans new and old will love this dark, intense prequel to the hit podcast. Soon to be a television show, the twisted thrill of story that burst onto the audio scene several years ago has just been begging for a book. Cote Smith has delivered with âLimetown.â

For those who havenât yet experienced the strange world of the Limetown podcast, be prepared for a wistful and dark romp into the human psyche. Limetown was formed by a famous recluse and populated by a horde of scientists; it quickly became a source of conspiracy theories before it suddenly disappeared â prompting a great deal of public outcry.

The townâs story, and its inhabitants, forms a backbone for Lia Haddockâs journey in the book. Part family drama, part coming of age, Liaâs story will both resonate and stun as she gets closer to the truth about who she is and what that might mean for her future. By contrast, her uncle Emileâs story, told in alternating chapters, sets up the beginning of Limetown in a hauntingly sad and human story of the cost of being different. âLimetownâ is a fast-paced, winding story worthy of both the long-time fans, and new readers ready to be captured by the tale of a strange little town in Tennessee. ♦