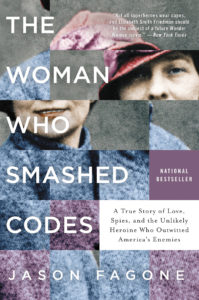 âThe Woman Who Smashed Codes: A True Story of Love, Spies, and the Unlikely Heroine Who Outwitted Americaâs Enemiesâ

The focus of a recent episode of a missing history program was on William Friedman, a groundbreaking cryptologist. It said nothing about Elizebeth Friedman, his wife, who was also an important cryptologist. The story of their role in code breaking for the United States during both World Wars and their love story is wonderfully presented in this book.

They met at the estate of an eccentric tycoon, married there and started to develop the science of cryptology. William entered the Army during World War I, stayed well beyond World War II, and developed the NSA expertise in code breaking, all of which gained him recognition. Elizebeth established a code-breaking unit in the Coast Guard that assisted in tracking and capturing rum runners and drug kings. During World War II, she was instrumental in
tracking Nazi spies in South America, something for which the FBIâs Hoover unfairly claimed credit. Unlike her
husband, she was not recognized for her contributions; this book corrects that oversight. ♦ 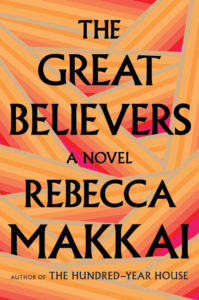 In January of 1986, our nation pulled together to mourn the seven lives lost in the explosion of the Challenger space shuttle, a defining moment in history. What strikes me is that there was a totally different kind of explosion during that time period which took its toll on tens of thousands of lives but did not initially escape the boundaries of the gay community â the outbreak of the AIDS epidemic.

The âGreat Believersâ tells two stories. The first follows Yale Tishman, an art dealer in Chicago in 1985. The novel opens at the funeral reception of his young friend Nico, who has died of AIDS. We also meet other members of Chicagoâs Boystown, a community of homosexual men experiencing the horror and ostracism of the âgay disease.â Many of these men have lost the support of family members. Fiona, Nicoâs sister, is a rare exception. Fionaâs is the second story, 30 years later, as she comes to terms with the way the AIDS crisis affected her, ultimately moving to Paris to find her estranged daughter.

This was a hard book to put down. Rebecca Makkai tells these stories with humor, heartbreak and the underlying theme of lifelong friendship. ♦