Award-winning author Donald Morrill presents his first novel, âBeaut,â a gorgeously written tale of family and motherhood, love and heartbreak, and the possibilities and failures in life. We learn about Jill Lundgrove through her writing to an as-yet unnamed person. Through fits and starts as she writes, stops and begins again, taking breaks and refusing to take breaks, we âscroll back over these pagesâ with her. âLet me try again,â she says as she starts a new passage.

At 66, widowed for years, she has just recovered from flat-lining. While in the hospital, her house burned down, quite possibly at the hands of her son, Monster. Monster (a childhood nickname that became âa joke that was finally no jokeâ) meddles with meth in her basement, along with his cronies, and licked an ice cream while watching her have a heart attack on the floor. âIâm a failed mom,â Jill writes as she thinks of Monster and her three other children. She feels âundependableâ and wonders if sheâs let down those who needed her, âall those waiting for (her), for whom (she hasnât) done, donât know how to do.â

Writing from a rental in Des Moines, she faces what seems like her âapproaching destitutionâ and inevitable aging. Just as she has the promise of a new relationship with Ollie, she reflects on her past with her husband, Ray, and their children and how she âsumped around,â consumed by her âattitudesâ and âdrears.â Ultimately, her writing becomes a gift and a legacy.

Haunting imagery enriches the story: Ray is âcombing out old Christmas tinsel with his fingersâ as he confronts his diagnosis of cancer. A window fan has âblades like a ghostly disk in the glow of the streetlight.â Jill wants to shed âthe cruddy nightgown feelingâ after being holed up all winter. Spot-on characters and beautiful language shape this powerful, affecting novel. ♦
â Review by Fay Jones 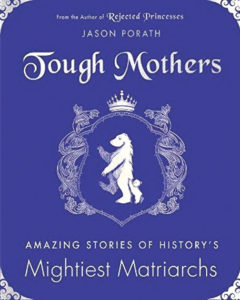 History doesnât so much erase mothers â most heroes are born after all â as ignore them. After all, if a woman has a family, she canât possibly be anything else right? Between diapers and naptime and doing the dishes, when would a mother have time to revolutionize breast cancer treatment? Or fight a brilliant and subtle war against European colonizers? Or develop an entirely new area of archaeological research?

In his newest book of deeply researched, brilliantly told and beautifully illustrated stories, Jason Porath tells stories of women who have raised children, followed their passions and changed the world at the same time. Multi-tasking with the best of them, highlights include stories of Isabella of France, Sojourner Truth and Sacajawea. Ranging all over the world and all throughout history, there is something here for everyone. This fantastic book is filled with stories that wonât necessarily surprise many mothers, but I bet it will make them smile. ♦
âReview by Julie Goodrich