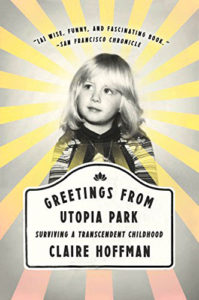 In the early 1980s, after being abandoned by her alcoholic husband, 5-year-old Claire Hoffmanâs mother, a devoted practitioner of Transcendental Meditation, abruptly moved Claire and her brother from New York to Maharishi Mahesh Yogiâs headquarters in Fairfield, Iowa. âGreetings from Utopia Parkâ is a daughterâs moving memoir of growing up in the strange environment of a semi-religious, often cult-like subculture plunked squarely in the middle of a traditional Iowa town.

Bounced from public to the private Maharishi school depending on the family finances, the author was able to keenly observe the difference between âguruâ and âtownieâ upbringings. While she personally felt the benefits of the secret peace reciting her mantra could bring, as she grew older she was disturbed by the rigidity and unquestioning devotion to the charismatic Maharishi by those in the movement.

This is a compelling memoir filled with sharp insights about one of Iowaâs most unusual towns. ♦ 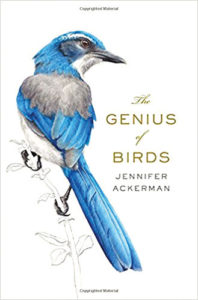 Most of us think of bird intelligence in terms of the sobriquet âbird brain.â However, Ackerman poses many reasons why this term is so little deserved. Her first defense is the use of tools. Stripping and bending branches to create hooks allowing birds to fish out food from a hard-to-reach place seems very supportive of her assertion.

Aligned with use of tools is innovation and problem solving. Assorted studies revealed vast differences in bird species and even within close relative groups. Higher innovation generally means greater intelligence. And innovation can be key to adapting to change, a critical ability for preservation of oneâs kind.

One of the more mysterious of bird abilities is their migration patterns. Ackerman presents theories of how birds know how to migrate: Is it purely innate? Is it learned? Does it depend on physical capabilities (hearing, magnetic awareness)? This book is a fascinating review of the studies and findings from across the world. ♦