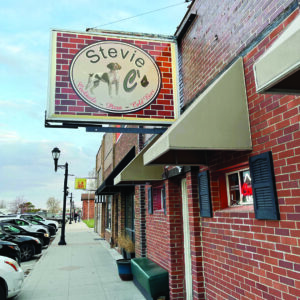 After visiting Stevie Câs half a dozen times with friends, I suggested writing a Belly Up column on this dive bar-ish place. My friend cautioned, âNo! We donât want people to know about this bar because theyâll get too busy.â

Sorry, friends. Itâs already popular. With a motto such as âKeepinâ it Classy,â one might question: What makes Stevie Câs so classy? Is it the thousands of stickers plastered on the walls? Or is it the 600 bar tapper handle collection mounted on the ceiling?

Stevie Câs has been a mainstay in downtown Grimes since 1976. The bar was named after former owner Steve Cavanaugh. His son, Brandon, took over the bar in 1986.

You donât need an address to find the joint. As you walk along downtown, just look for a faded sign along a brick building and enter the outside door covered with stickers.

Itâs not just a place to read clever, funny sayings â although that is a highlight of the bar. These sayings are unique free entertainment, belly laughs and conversation starters. For example:
âPissing off the bartender can be a sobering experience.â 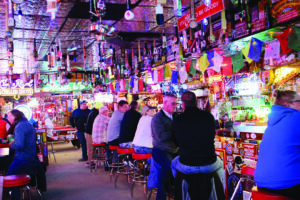 âDiapers and politicians should be changed often, for the same reason.â
âIf you canât say something nice, say something funny.â

Did we mention the bar serves food and drinks? The Titoâs Vodka, soda and cranberry concoctions are some of the stiffest drinks sampled since we began the Belly Up column.  And the prices? Take a $20 bill, buy drinks for four of your friends, and still get some change back.
The bar menu includes typical bar food, plus homemade pizza  â  a real highlight. Try a large single topping for $18. A laminated list of the craft beer selections is a pleasant surprise with decent options. There are two pool tables, a few games and a handful of TVs. There could be more items, but, with all the stickers and license plates, itâs hard to tell.

A mix of all ages frequent Stevie Câs. On a recent Friday evening, a large crowd gathered by 5 p.m. The music in the video jukebox evolves during the night â classic rock for the first few hours, followed by country tunes. Toward the end of the evening, loud upbeat party music takes over. 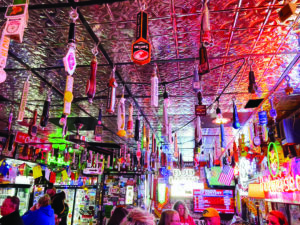 With various bar lights and colored stickers, the place is bright. The reasoning? You canât read all the bumper stickers in the dark. Head out back, and you will find a ânormalâ patio, sans the stickers.
The tapper handles on the silver ceiling only appeared last year, thanks to bartender Sandyâs idea. Sandy visited a bar in Nashville that did the same. When she returned home, she told Brandon, âWe need to do this here; itâs really cool.â They found some tapper handles in the back room and more on eBay.