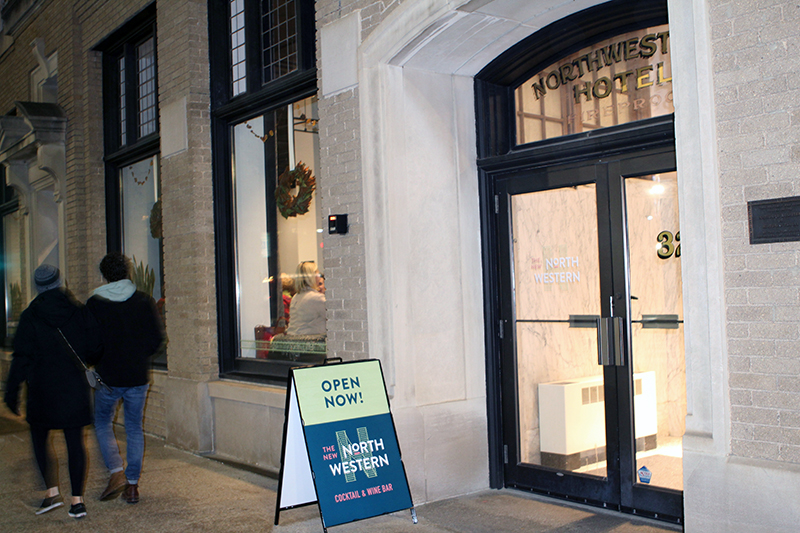 Take a stroll along the downtown streets of East Village and peek into the tall windows at the New Northwestern Cocktail & Wine Bar located at 321 E. Walnut. Inside, observe a lively group of patrons sipping cocktails and laughing, as they did more than 100 years ago at the same location.

Inside the bar, the railway car theme carries you back in time. A black-and-white backdrop of a train on tracks takes up the back of the bar. The marbled bar, along with green velvet comfy high-back chairs, sets the scene from a century ago. With about a dozen tables and ample L-shaped bar seating, itâs a cozy spot.

DÃ©cor includes floor-to-ceiling windows with heavy gray drapes, floor tile that could be original, along with frost glass swirls set in wood underneath the bar. 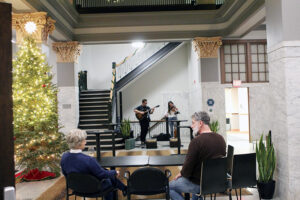 Live music is sometimes featured in the buildingâs atrium so patrons can bring their drinks into the lobby and enjoy.

A few modern touches hidden under the bar include USB ports and outlets to discreetly plug in devices, along with a few hooks for purses so designer handbags donât sit on the floor.

The drink menu is centered on wine and craft cocktails. An extensive wine list from across the red/white/sparkling spectrum includes more than 60 different wines. All wines are priced at $12 a glass or $50 a bottle. If you want to try some different wines, itâs a wine connoisseurâs chance to try it one glass at a time.

Craft cocktails include rail-themed drinks, including the Locomojito, with Bacardi Silver, coconut rum, key lime rum, cream and mint for $13. Drinks are often made with fresh ingredients and edible flowers.

A gin and tonic flight lands you a choice of three gins with any garnishes. The trio costs $25. Or, for $5 more, tell the bartenders your tastes and theyâll create one based on your drinking style.

The menu includes about a half dozen handheld sharables, including a charcuterie tray, bruschetta and smoked salmon crostini. Happy hour Tuesdays through Fridays from 3-6 p.m. lands you half off wine, beer and cocktails from a select menu. The place is closed Sunday and Monday. 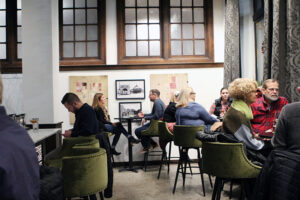 The railway car theme carries visitors back in time, and the green velvet high-back chairs are comfortable and create an ambiance conducive to easy conversation.

On a Friday evening, live music by Chad Elliott and Kathryn Fox was featured in the buildingâs atrium, where patrons can bring their drinks.

The New Northwestern Cocktail & Wine Bar lends to a quiet evening with a focus on drinks and ambience with a great first-date vibe. You can almost hear the train chugging and whistling as you settle in for the evening. ♦