New location with a spotlight on dinner theater 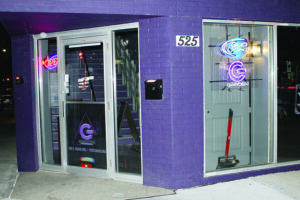 After 36 years, the Garden Nightclub moved from its old warehouse location on S.E. Fourth Street to a new location in East Village â the former House of Bricks. The Gardenâs last hurrah at the old place was on New Yearâs Eve of 2020. It relocated in May of this year.

The new location is a tad smaller and includes a rooftop patio and bar, which was temporarily closed during this review. Owners say the focus of the club has changed. As it is still the top gay bar in Des Moines, the spotlight is more on providing musicals, theater and variety club performances, along with their signature drag show events.

The kitchen was a big selling point. Co-owners Rusty Jones and Jerry Byrd are creating a dinner theater and show lounge experience, starting with drag show brunches on Sunday.

A âRocky Horror Picture Showâ event in October was popular, and they hope to do a live performance. A new music producer from Kata Klysmic Productions was hired. Nicholas Amundson is excited to provide entrainment for the new space. 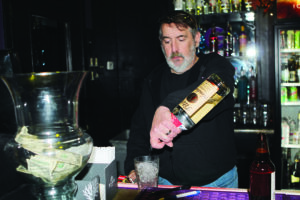 Co-owner Rusty Jones pours drinks at The Garden. The menu includes more than a dozen appetizers, sandwiches and breakfast items. A drink for two included a Titoâs cranberry and soda, plus a Big Grove Burch The Bear beer for $10.

âDinner theater is in high demand,â says Amundson. âPeople can see fun shows with a gay twist or a ramped up LGBT vibe, depending on the nature of the production.â

The Gardenâs stage is already used for burlesque and drag shows. The stage was named after Yazmine Youânique DeMornay, a popular showgirl at The Garden who passed away last year.

The menu includes more than a dozen appetizers, sandwiches and breakfast items, decently priced from $7-$13. A drink for two included a Titoâs cranberry and soda, plus a Big Grove Burch The Bear beer for $10.

Happy hour is all day Tuesdays and from 3:30-7 p.m. on Wednesday, Thursday and Friday. It includes $3 wells, $4 calls and $6 appetizers. On weekends, $15 buckets of beer and other specials apply.

The all-black dÃ©cor includes black walls and chairs with silver and glitter accents. Pictures of drag show beauties are artfully arranged on walls leading up to the stage area. When shows begin, a huge garage door shuts and bar patrons sit separately from the show. 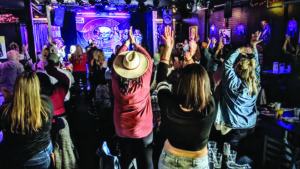 At the old Garden location, a lighted dance floor used to pump out techno disco music spun by a D.J. On this particular evening, 1970s and 1980s disco tunes were piped in.

âThe day of the big clubs are over,â says Jones. âWeâre incorporating our vision of a dinner theater and show lounge. Weâll still have a place to dance.â

Jones and Byrd are passionate about giving back to the community by providing an AIDs awareness fundraiser at the Capital, a toy drive and other charitable endeavors. Theyâre happy to be part of the East Village community and encourage folks to take in a show and explore downtown.

âWeâve had a great reception so far from our neighbors (East Village) and the gay community,â says Byrd. âWe want to provide a safe space for everyone â gay, straight â and celebrate good times together.â ♦