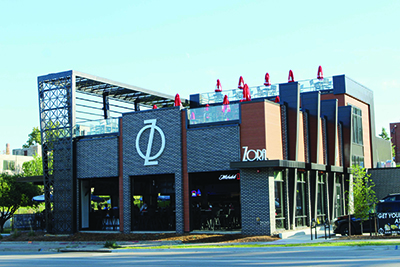 Location, location, location. Or is it all about the view? For the new Zora rooftop bar and restaurant, the answer might be both. Located at the corner of Martin Luther King Parkway and Ingersoll, the multi-level bar reportedly cost $5 million to build, and it boasts a spectacular backdrop of downtown Des Moines.

Letâs start at the top â literally. The rooftop patio is large with seating for more than 100. The patio chairs have backs on them, which is a nice touch as opposed to some patios with plastic chairs. The air is breezy, and the mood lighting at night beats to the sound of the music. Look up again, and there is a third level, smaller VIP patio area.

The rooftop has its own bar for drinks. The bartender said, in the winter months, they have an option to cover the upper bar and add heat lamps.

As youâre sipping a cocktail, witness a sprawling 801 Grand downtown nestled among the rest of the buildings. At night with the lights on, youâll experience the âoohsâ and âahhsâ of the city. 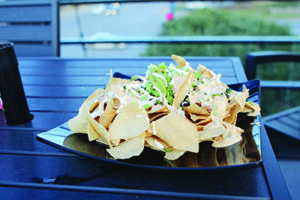 Downstairs, there are two more areas. An outdoor patio and indoor dining area share a double-sided bar. DÃ©cor is simple and black. A huge chandelier with the Zora logo floats from the ceiling. Three large garage doors open air to a bustling Ingersoll Avenue.

Two men from Ankeny who visit frequently sat in the corner downstairs patio table. They said itâs the best seat to watch for classic and specialty cars speeding by on M.L.K. or burning rubber on Ingersoll. In fact, one motorcycle revved up a two-block wheelie along Ingersoll to a gaping-mouth patron on the rooftop. Plus, there is free entertainment on a Tuesday. What more could you ask for?

Inside, black high-back leather chairs are comfy. Thereâs more than a dozen large screen TVs, but thatâs not the focus. Music piped in gets cranked up louder the later you stay.

Did we mention thereâs food and drinks, too? The apps, burgers and salads start at $11, with Zorachos â including nachos, guacamole, chorizo, queso and salsa â for $14. Northern Lights pizza options start at $6 for an 8-inch pizza, or share a whole pie for $18. 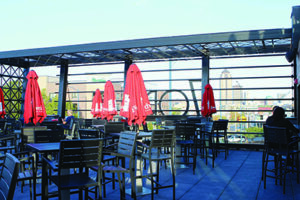 Thereâs a shot menu with a Bellringer for $8, or thereâs a full bar with domestic beers and local IPAs. A tall glass case with high-end liquors is available; however, my Belly Up buddy and I didnât request special bottle service on a weekday evening. Mobile ordering means you scan your table number and put your name and order in via your phone.

Parking only includes two dozen spots, so plan on getting creative to find an open spot along Ingersoll.

If you want a view of the city and bright lights, then head over to Zora. ♦