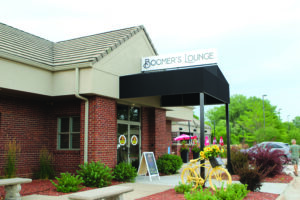 Boomerâs Bicycle Lounge is aptly named, as itâs right off the Jordan Creek Bike Trail. Itâs one of the largest, and best, scenic patios in West Des Moines, as it overlooks the trail.

Bright red patio chairs at both low- and high-top tables â along with comfy gray couches â sit among the shade and umbrellas. The green turf grass surface on the patio makes it feel like walking on a putting green.

On a hot summer evening, misting fans cooled things off outdoors. Itâs a good option if youâre coming off the bike trail hot and sweaty. However, if youâre a writer with a camera and a paper notepad, water droplets arenât necessarily a friend. 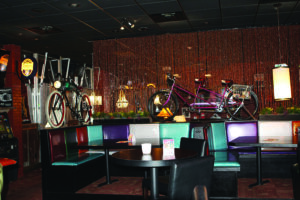 Located right off the Jordan Creek Bike Trail, Boomerâs is a bicyclerâs hotspot. More than a dozen vintage bikes, along with bicycle parts, are displayed on the ceiling and walls.

The outdoor bar serves a selection of domestic and local beers, along with a full bar. One new special is a Friday night happy hour from 5-6 p.m. Choose from $1 domestic draws or well drinks. Listen to live music on the outdoor stage on Friday evenings and Sundays from 3-6 p.m.

One surprising feature was the menu, offered by TaKo. The menu description says, âTex Mex meets far east with a little fusion mixed in.â So, imagine tacos with sesame seeds, marinated ribeye, kimchi and mozzarella on a grilled corn tortilla. It works.

The TaKo pizza came out with a lavender colored sauce circling the top of the pizza. The light purple resembled the color of a 1980s-era prom dress. Once I bit into the pizza, there were so many different flavors, including spicy, tender meat and plenty of mozzarella all on fresh-and-chewy crust. And the lavender? It was purple lime crema sauce. 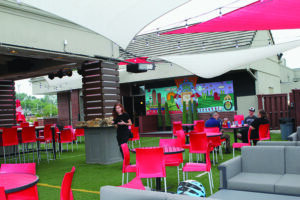 Boomerâs offers one of the largest and best scenic patios in West Des Moines.

Head indoors and check out the bicycles inside the bar and restaurant. More than a dozen vintage bikes, along with bicycle parts, are displayed on the ceiling and walls. The brightly colored vinyl booths and seating, along with a 1970s kitschy dÃ©cor, was like walking into an antique store.

Things have spruced up indoors, and the patio remains a solid selling point from its former digs as 50th Street Tap, Taco Hangover, Saints Pub and a few others.

This new concept, along with the TaKo addition, make Boomerâs definitely worth a visit. ♦